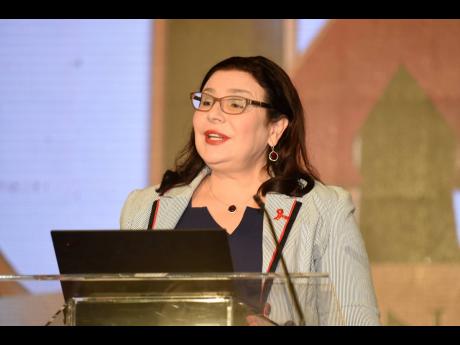 Manoela Manova, UNAIDS country representative for Jamaica, says the country has been off track with achieving targets geared towards ending AIDS by 2030, even before the dawn of COVID-19.

Speaking at the Jamaica AIDS Support for Life’s (JASL) HIV Treatment Public Forum on Tuesday, held at tThe Jamaica Pegasus Hotel in New Kingston, Manova emphasised that, with nine years left for 2030, HIV advocates, experts and citizens need to step up their efforts in putting an end to new cases of infection.

“We are definitely off track. We were off track before COVID, and now, with COVID, even worse, and only a very small number of countries have been able to achieve the previous so-called fast track targets by 2020,” Manova said.

The 95-95-95 strategy was announced by UNAIDS in 2014. It aims to end the AIDS epidemic in 2030 by achieving 95 per cent diagnosed among all persons living with HIV, 95 per cent on antiretroviral therapy (ART) among diagnosed, and 95 per cent virally suppressed among treated.

“Here is what Jamaica has committed in the new global fund grant. Linkage of newly announced [cases] into treatment, in 2021, we have 58 per cent. The target that the country and all of us that support Jamaica have committed [to] is 95 per cent to be reached by 2024,” Manova said.

She said new targets also include calling for treatment, 90 per cent coverage of HIV evidence-based services, removal of societal and liberal barriers to access to services, and emphasising the importance of integrating HIV response with the efforts to achieve universal health coverage.

“Our favourite new targets; targets on social enablers, the so-called 10/10 targets for removing social and legal impediments to work and enabling environment,” she said.

Manova stated that 2021 marked two landmark documents being launched to help with ending new cases of HIV by 2030.

Before ending her address, she emphasised in her call to action that Jamaicans need to step up their pace in fighting the AIDS epidemic.

“HIV is not a health issue. It has been something we’ve been talking in the beginning of the epidemic, that it is a development issue, and that’s why we are calling for a multi-sector, all hands on board approach to address its complexity. Because if it was so simple, we [would] have already sorted it out,” she said.

“We all will need to double, triple our efforts, our creativity, to find a way to reach these targets, because, if we reach them, it means Jamaica will be on its track to actually end AIDS by 2030 ... . We have a huge, huge, huge work to do in order to achieve this ambitious target,” she added.