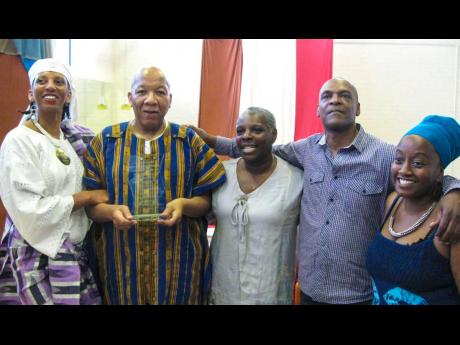 Contributed
Jackie Guy (second left) is congratulated by colleagues after he received the Lifetime Award from the Association of Dance of the African Diaspora in 2011.

Ramocan said: “It was with profound sadness that we learnt of the passing of Carlton ‘Jackie’ Guy, MBE, CD, renowned Jamaican dancer, choreographer and cultural historian.

“Jackie, or ‘Uncle Jackie’ as he was known to all, was a talented, compassionate and generous person. He loved music and dance, and was a dedicated advocate of Caribbean culture and dance forms. He had a huge personality, cheerful and helpful.

“He was an immensely talented and innovative choreographer, a patient and wonderful teacher. Jackie was a bit of a perfectionist and could be a hard taskmaster, but he did so with much care and love.

“He was always willing and enthusiastic to share his vast knowledge and love of music and dance with everyone, particularly young people. Always generous with his time and his talent, he nurtured and mentored scores of young dancers and musicians during his lifetime.

“We at the high commission looked forward to him bringing the joy of traditional music and dance to hundreds of schoolchildren at the mission’s annual Jamaican Christmas Programme. This was a role he relished for more than a decade, and it brought great joy to the students and teachers alike.

“For more than two decades, Jackie choreographed the Dance of Praise segment of the high commission’s annual Service of Praise and Thanksgiving to celebrate Jamaica’s anniversary of Independence. This was a very popular and much-anticipated section of the service.

“We were particularly proud and happy to have hosted and shared in the fantastic celebration of his 75th birthday in August 2019. Jackie loved his country and its rich heritage and culture. We will miss his laughter, his compassion and his zest for life.”

High Commissioner Ramocan added: “We extend our sincere condolence to Jackie’s sister and brother, his extended family, friends and loved ones. A true friend like Jackie is never truly gone. His spirit lives on in the memories of those who loved him. May his soul rest in peace.”

Guy was educated in Jamaica at Windsor High School and the then College of Arts, Science and Technology in personnel management, industrial psychology and accountancy, but dance was his real passion.

He started dancing from a young age at the ballet school run by Alma Mock Yen at her home in Harbour View, St Andrew, in the 1960s. It was not long before his talent in creative dancing took him to the NDTC, where he performed in many of the company’s great works, both locally and internationally.

He was also well known for his work with The University of the West Indies Dance Society, where he harnessed the creative energy of hundreds of members for over a decade, before he migrated to England in the mid-1980s.

In England, he quickly immersed himself into the creative arts industry and was appointed artistic director of Kokuma Dance Company in Birmingham. Under his leadership and vision, the company won the Black Dance Awards for Outstanding Choreography and Production, and the Prudential Commendation Award for Excellence, Innovation and Creativity.

In 1998, he made a significant contribution to the development of IRIE! Dance Theatre’s groundbreaking dance diploma in African and Caribbean dance.

Jackie Guy also choreographed the hit Jamaican musical The Harder They Come, which started life at the Theatre Royal Stratford East in 2006.

The musical continued with a successful season at the Barbican, followed by a long West End run at The Playhouse Theatre in 2008. The show continued on a first International tour to Toronto, Canada, and Miami, Florida, in 2009, returning to a national tour which ended at the New Wimbledon Theatre in June 2010.

In 2011, Guy was named ‘one of the greatest black dancers of all time’, by the Voice Newspaper and that same year, he received a Lifetime Award from the Association of Dance of the African Diaspora.

In November 2012 he was awarded an MBE in the Queen’s Birthday Honours List, in recognition of his outstanding contribution to dance education in the United Kingdom. The Jamaican national honour of the Order of Distinction Commander Class followed in 2015 from the Jamaican Government.