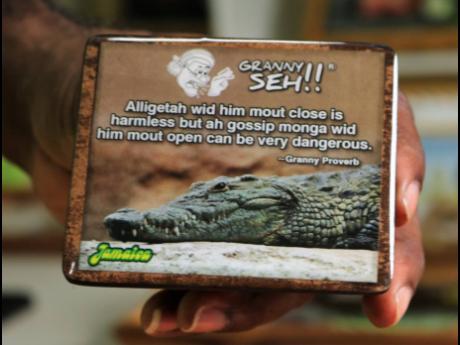 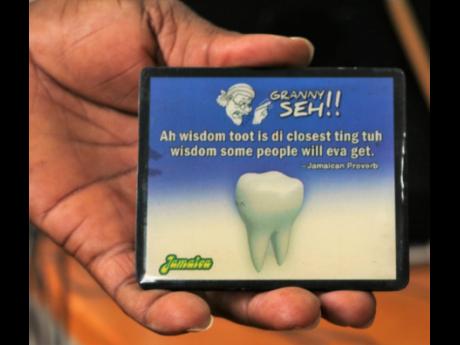 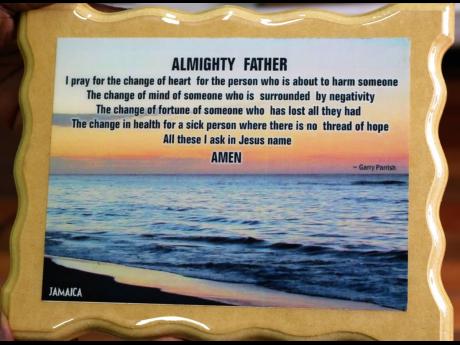 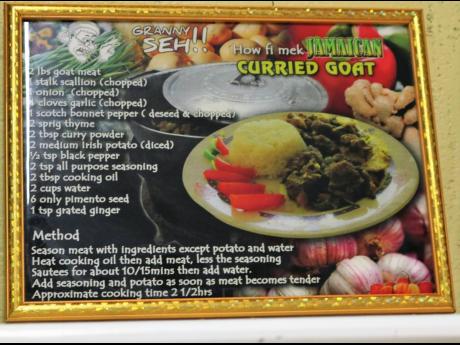 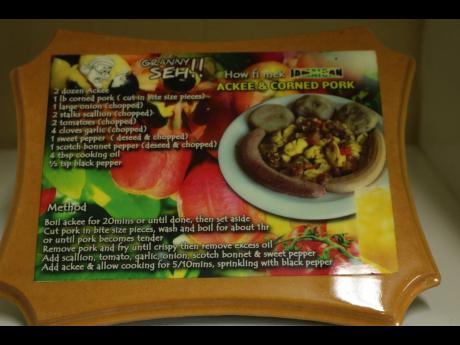 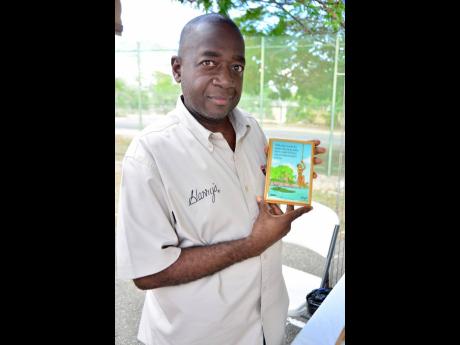 It is evident that Garry Parrish is very much in love with his colourful, inspirational and oftentimes comedic creations, which run a gamut of emotions, and is intent on sharing the joy he gets out of the creative process from conceptualisation to completion with the rest of the world.

Whatever the format of an authentic Jamaican souvenir you desire – desktop solutions, serving trays, key holders, menu plaques or refrigerator magnets – Parrish can create it in lasting, vivid and colourful imagery. His bias for the restaurant business in which he was involved at the managerial level often comes out in the vivid pictures that accompany some of the menu adornments.

“Don’t always accept gratitude from the people you are generous to; being kind to a lion will not keep you off its menu,” are the original wording on one of his creations.

“God has to use people with setbacks to inspire people where there is no hope because they feel that once they buck their toe that is it basically and they want to give up on life. Sometimes I tend to use my quotes to inspire as well as address some of the harsh realities of life, such as ‘You can’t want poodle and have mongrel money – live within your means’,” Parrish, CEO of Garry’s Concept, shared with The Sunday Gleaner.

In addition to using Jamaican proverbs of old, Parrish has coined a few of his own and has also gone as far as to translate some into French and Spanish.

Authentic Jamaican souvenirs featuring inspiring quotes is a niche market he is looking at cashing in on, pointing out that so many visitors to the island, including diplomats, do not get to enjoy the essence of these wise sayings in their own language.

“No one is in this market. People coming from Spanish-speaking countries are deprived of enjoying these interesting quotes, and with the Spanish market for hotels and tourism pre-COVID, there was an emerging market. The hotels on the north coast, they saw one of my pieces and invited me to display my wares but COVID disrupted these plans before it got a chance to take off,” he said.

The uncertainties associated with the pandemic continue to impact business, as he now has a lot of created items in storage after a sponsor pulled out at the last minute. Still, he remains undaunted.

Now with tourism poised for a cautious rebound, with optimistic projections for the tourism winter season which officially gets under way on December 15, this entrepreneur is hopeful that his fortunes will also pick up, having suffered some serious setbacks.

Parrish was well on his way to creating an impressive catalogue for his souvenirs, including 5,000 quotes, and various other compilations in three old notebooks, then someone broke into his vehicle and stole his laptop, camera, back-up thumb drive and everything else connected to his trade. He was forced to start all over but this time with safeguards against any such recurrence by copyrighting all his works with the Jamaica Intellectual Property Office.

He also has a YouTube channel, Granny Hotline, where he offers advice on a range of issues and fields question about the affairs and lifestyles of characters such as Whisper, Scatter Brain, Stamma and Tekeisha Ketch Man, for which he does all the voices. Parrish explained that the characters he portrays are composites of the many people he has interacted with over his lifetime.

With the tourism industry his primary marketplace, the innovative entrepreneur is also looking to use Amazon as a delivery platform, especially for the Jamaican series of sayings and proverbs that have been translated into French and Spanish.

The credit for his creations are, however, not all his own, Parrish readily admits, telling The Sunday Gleaner that, “I cannot leave God out of it because guess what, I experience what some people call a ‘quote attack’ because sometimes when I get up in the mornings and hit the shower, I have quotes coming to me in such intensely that I have to cut my shower and write, sometimes as many as 30, 40.”

With that said, however, not even church members are spared from his creative mind but he admits that it is all done in good, clean fun, even when he ruffles feathers, such as with this message on a refrigerator magnet: “Not because pastor give you church key that no mean say you can open heaven gate.”

Twenty-year-old graphic artist Alex Cole also plays a key role in the creative process, as Parrish explained, “I give him the picture and the word and he does the layout, and now I am thinking of sending stuff overseas and he said he could make the personalised boxes that you cannot get in Jamaica. Jamaicans from abroad come and laugh every time they see my works so my aim for this year is to target the diaspora.”