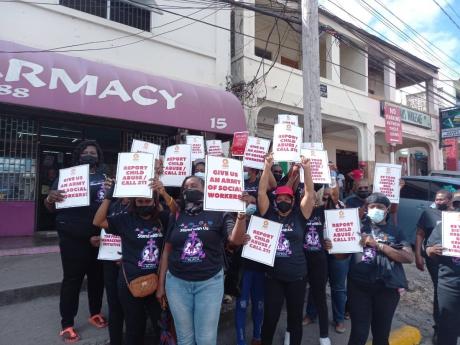 Cecelia Campbell-Livingston
A group of women with placards voice their concern against violence against women, in May Pen, Clarendon. They are demanding action to be taken to protect women and ensure speedy justice is given to victims of violence.

A group of more than 20 placard-bearing women stood in May Pen, adding their voices to the fight for eliminating violence against women on November 25.

Yvette Anderson, People’s National Party (PNP) Women’s Movement convenor for Clarendon, told The Gleaner that she has been impacted by violence in her family and wants to see an end to it.

She recalled her late sister going to the police station to make a report on her abuser and when she got home, was killed by the same man she had just filed the report on.

Charmaine Wilson, a member of the PNP movement in southeast Clarendon, said enough is enough.

“We have been victimised long enough, enough is enough we are faced by violence every day and the police force is not equipped to carry out all the needed investigations,” she said.

The solution, according to Wilson, is for the Government to provide “an army of social workers” for dispatch into the communities and find out exactly what is going on.

She also had issues with the length of time it was taking for Nzinga King to get justice for what was allegedly done to her.

King, a teenage Rastafarian, made the news after her hair was allegedly cut while in custody at the Four Paths Police Station on July 22.

Wilson said it is time that the truth be released as INDECOM, the police watchdog organisation, has already finished its investigation and the file has been sent to the director of public prosecutions.

“And that’s it nothing more, silence, complete silence,” she said.

Sadie Lewis, councillor caretaker for the Mineral Heights division, said she wants to see the back of crime and violence against women as they have been fighting the cause for decades.

Adding her support also for King, she said she is prepared to go to the “end of the world” to ensure justice is served.

She said women in Clarendon have been dealing with violence for years now and they have been violated in their communities, as well as observing it in the country.

Lewis stressed that women are the ones feeling it and urged other women to stand up for their sisters.