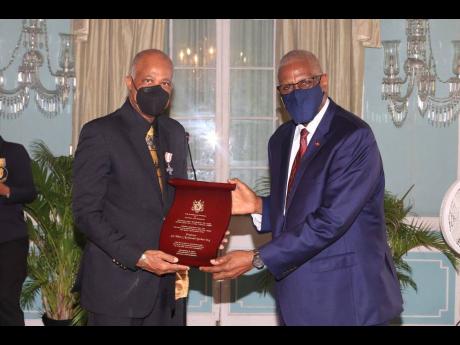 Governor General of Antigua and Barbuda, Sir Rodney Williams, has conferred the Governor General’s Faithful and Meritorious Award’s highest honour, the Cross and Plaque,upon Vice-Chancellor of The University of the West Indies (The UWI), Professor Sir Hilary Beckles.

The award recognises Vice-Chancellor Beckles’ 40 years of distinguished service to The UWI and the Caribbean.

Sir Rodney described Sir Hilary as “a giant of a Caribbean man who has a passion for people, a passion for progress, a passion for productivity and a passion for preserving the past treasures of the region”. The governor general also shared that the honour was not only well deserved, but timely since the Vice-Chancellor’s 40 years of distinguished service at The UWI coincided with the celebration of Antigua and Barbuda’s 40th anniversary of political independence.

A lengthy citation, which outlined the many academic accolades and internationally recognised social contributions of Professor Sir Hilary, also identified his leadership at The UWI as a transformational one, as evidenced by the results of his Triple A management strategy of Access, Alignment, and Agility. This strategy laid the foundation that led to The UWI’s recent ranking among the top universities globally by the most reputable ranking agency, Times Higher Education (THE), and its current standing among the top 1.5 per cent of universities in the world.

In his response, Beckles expressed his gratitude to the governor general for the honour. He also shared that divine intervention, the influence of his parents, mentors, and his hard-working team at The UWI have all contributed to making him the West Indian man he is today.