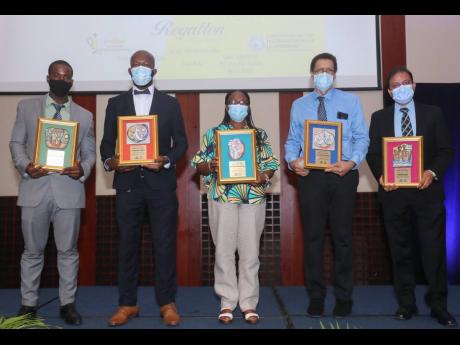 WHILE ST JAMES has not been hit as badly as some parishes as it relates to COVID-19 cases and deaths, the Montego Bay Chamber of Commerce and Industry (MBCCI) is nonetheless full of gratitude to the parish’s frontline workers – nurses, porters, police, soldiers, firefighters, and doctors – for the heroic role they played in battling the virus.

On Sunday, the MBCCI, in association with the charity Sarah’s Children, staged the inaugural Frontline Honour Award, which saw 31 frontline workers being recognised for their selfless service to their community and country during the ongoing pandemic, which regularly sees them putting their personal safety at risk.

“There are many things that are right with Jamaica, and this is one of them,” said Janet Silvera, president of the MBCCI and the driving force behind Sarah’s Children. “This award ceremony had to happen because of the sacrifices that you, the frontline workers, have made to the city of Montego Bay and the wider St James.”

“I am not there in person, but I want to ensure that you leave happy. We are giving out $3.3 million worth of prizes,” noted Silvera, who spoke via Zoom to the awardees because she was not able to attend the event, which took place at the Montego Bay Convention Centre.

While all the awards were equal in status, the awards given to Nurse Eulalee Somerville-Edgar; Dr Harvey Crawford, a consultant in the oncology department at the Cornwall Regional Hospital (CRH); and Sergeant Bruce Walker, the sub-officer at the Montego Hills Police Station, were somewhat special as they were singled out from their respective categories.

In an interview with The Gleaner subsequent to her award, Somerville-Edgar, who has been operating out of the radiotherapy department at the CRH for over 30 years, said she generally operates under the premise that her life belongs to her patients.

“For everyone, it’s a bit scary, but you have to do what you have to do. At the end of the day, our lives really don’t belong to us,” said Somerville-Edgar. “Nursing is not just a profession, it is a calling; so whatever I do, I do knowing that there are people depending on me to be at work.”

Walker, who was singled out among his peers for his award, was appreciative of the gesture, especially as it is not often that recognition of this nature is given to persons on the frontline, facing the challenges head-on.

“Normal policing changed for me and those under my command as on several occasions during the early waves of the virus, we had to visit homes where residents had contracted the virus and died,” said Walker.

He also noted that he and his team had to rise to the occasion by stepping up their service level to assist with transporting persons to the hospital and by providing care packages.

Health and Wellness Minister Dr Christopher Tufton lauded the initiative by the MBCCI, especially as it relates to the many categories of health workers who were recognised with an award for their service.

“It’s a tribute to not just those who have been on the frontline, as deserving as they are, but a tribute to the population, and the chamber here in Montego Bay, for the recognition that without those frontline workers, the challenges would have been much more difficult,” said Tufton.

The breakdown of the $3.3 million in prizes included gifts of scholarships, a JSW-sponsored 32-inch television set, weekend vacations, and plaques.