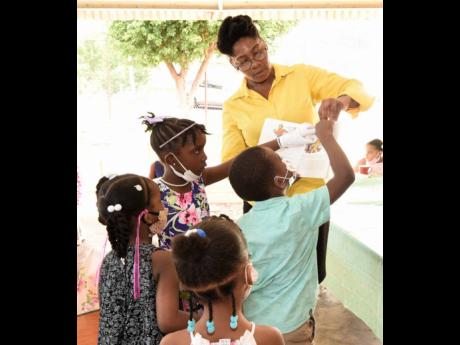 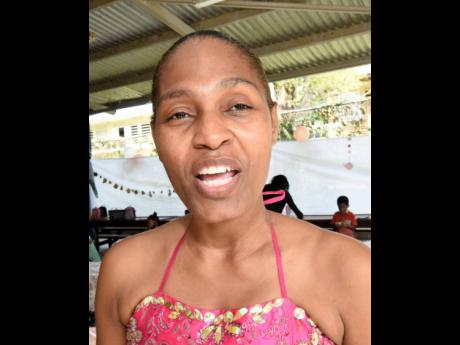 A class of six-year-olds at the Shortwood Practising Primary and Infant School in Kingston was held spellbound recently when animated storyteller, Christine Angella Neil (Aunty Christine), spent some time with the little ones to share with them an interesting story titled, ‘Saving Joe Louis’.

The children were told a story about a four-year-old boy called Omar who doesn’t talk. With eyes focused on a spirited Aunty Christine, the children showed much excitement as they were told that Omar’s parents, Emily and Roy, believed he could not speak.

“One day the boss tells his father to get rid of Omar’s pet rooster, Joe Louis, and Omar decides to take Joe to the beach to save him,” Aunty Christine said in a full-throated voice.

It was a Thursday, but not a regular routine day for the kids at school where teachers provide instructions in various subject areas.

Anticipation was high as the youngsters, dressed smartly for a tea party, waited for the activities to get into high gear.

The tea party was a practical experience from the students’ curriculum. Vice-principal of the institution, Sonia Phillipson Davis, said her students participated in a tea party because it was a practical way of getting them to learn about one aspect of the European culture.

“This is one practical experience that they are getting among a number of other experiences. For the little ones, it is very important for us to do it this way because children can learn from stories and pictures, but they learn best from their own experiences,” she told The Gleaner.

As they await tea to be served, some of the children started to become a little restless but teachers were on hand to restore calm.

However, before the tea party started, Aunty Christine shared a captivating story written by Isabel Marvin and illustrated by Clovis Brown, which held the children in suspense as some moved out of their seats to get closer to the action.

Mimicking the sound of Joe Louis in the story, Aunty Christine triggered echoes of crowing roosters across the classroom as the youngsters tried to match the sound of the bird.

She painted a bleak picture of Joe Louis whose fate hung in the balance as the children waited with bated breath to hear what would happen to Omar’s best friend.

In the end, the children were elated as they were told that Omar broke his silence for the first time when he said to his parents, “Don’t get rid of Joe Louis”. His parents were delighted, Aunty Christine told the children, as they rejoiced that their son had finally spoken.

In a Gleaner interview, Aunty Christine said the importance of teaching children to read from a very early stage could not be overemphasised.

“Once you get that started, then the sky is the limit. It’s not just about reading. Whenever I read I interact with my students, using pictures and asking them questions. I also read with expression because whenever there are different characters in the story, you have to give each character a voice – whether it’s the dog, the puss, the fowl, the snake, even the wind – you have to imitate that so they have a literal feel of what the story is about,” she added.

She noted that there is a greater challenge getting boys to read without continued prompting. “We want to get our boys more involved in reading and get that creative process going on.”

The animated storyteller said she was open to sponsorship in visiting schools and other institutions to stimulate youngsters to the joys of reading.

“We have the Taino experience … a lot of other things that I think that our kids need to learn about, not just the symbols but the stories behind the symbols.”

Meanwhile, Shortwood Practising Primary Infant and Junior High will be celebrating its 135th anniversary on January 17, 2022.