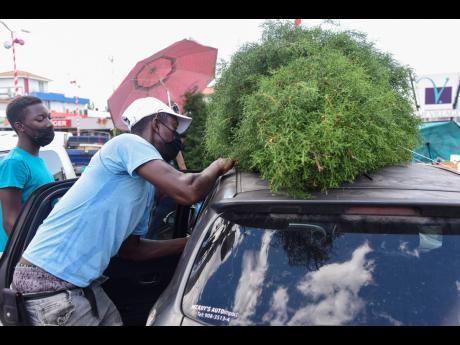 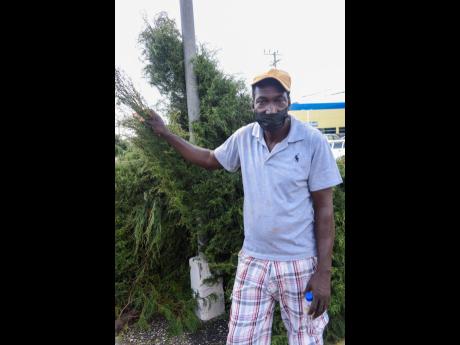 The COVID-19 pandemic has not appeared to have dampened the Christmas spirit of some Jamaicans who still take pride in erecting and decorating their trees every holiday season.

This is so, as pine tree vendors located in front of the Village Plaza in the Half-Way Tree vicinity have been since reaping rewards with less than two weeks left to the big day.

“The closer you go down, people get more excited,” remarked Tavares Grant, who have been selling trees year after year in the same location for 30 years.

Just last Saturday, Grant sold more than half the number of trees he ventured out from the cool hills of Blue Mountain, Penlyne Castle in St Thomas, to Kingston, ramping up sales of $1,500 per foot for 10 of the 12 trees he brought.

With a new set of trees, more than the batch he sold on Saturday, Grant told The Gleaner on Monday that based on what he has been witnessing so far, he expects much more sales when the holiday season draws nearer with more people starting to make their Christmas purchases to spruce up their homes.

Margaret Edwards, the only female tree vendor on location, who has been in the business for over 30 years, recalls the previous years of having to decorate her home and put up her Christmas tree from early before making the long haul to bring the pine trees and their respective stands to Kingston.

This, she says, was worth it, as since the last week of November, sales have been pouring in.

Making a comparison to last year and this holiday season, Edwards says this year looks to be very promising.

“Last year, it was a good time ... We eat food, everybody eat food, so [this year] we hoping to eat even more food,” she told The Gleaner.

Despite profit projections from his fellow salesman, Marvin Hall, who took over his father’s tree-selling business in Kingston many years ago, said his usual clientèle of elderly Jamaicans from whom he would normally receive delivery orders has dwindled. “Most a dem migrate, and them grand pickney nuh tek it up,” he said of the Christmas tradition of buying trees.

This disinterest, nonetheless, has not negatively affected him as after toiling in the fields, tending to the maintenance and growth of trees which take approximately two years to reach maturation, the 36-year-old says “this year look like it better than last year”.

Hall has sold 20 of 25 trees he travelled with on Sunday.