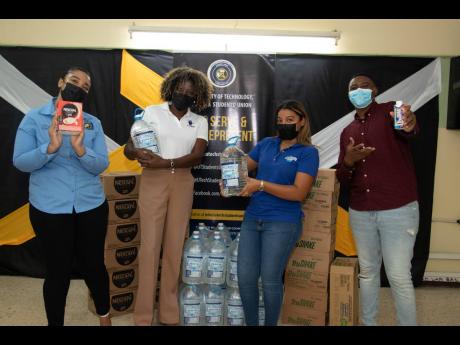 Students at the University of Technology, Jamaica (UTech) who face food insecurity are set to benefit from hearty donations of WATA, NESCAFE 3 in 1 coffee and TruSHAKE. The donation, coordinated by UTech alumna Geli-Anne Campbell, in collaboration with the UTech Students’ Union Council’s (USUC), Student Services Committee, was executed in response to a recent study funded by the UTech Research Development Fund, which revealed that at least half of its student population suffers from severe food insecurity.

USUC Vice-President Tavoy Barrett pointed out that “a student is considered to be suffering from food insecurity once they worry about where their next meal is coming from; basically, not having a reliable source of nutritious food.” He further explained that students can suffer from mild to severe food insecurity. “A student who suffers from a mild case may go two to three days of not knowing where their next meal is coming from, while those suffering from a severe case can go seven days consecutively,” Barrett asserted.

In response, the council launched sub-campaigns of its ‘End Campus Hunger’ initiative, dubbed #ShareYourBreakfast and #ShareYourMeal, to negate the issue which has plagued students over the years; and more so now as a number of students have been hard hit by the pandemic.

So far, the End Campus Hunger initiative has assisted over 100 students with items to prepare at least three meals daily.

Campbell, managing director of FANNE Promotions and Media Management Services, saw the potential for the initiative to impact a great number of students and solicited support from Corporate Jamaica to aid the plight of affected students. “The results of the study were alarming to me, so I decided to play my role as a past student and use the resources and connections that I have to help the students. The clients and colleagues that I reached out to were all too willing to come on board, and the UTech Students’ Union were really receptive,” she expressed.

WATA, a Wisynco brand, was among the donors that supported the End Campus Hunger initiative. Brittany Roberts, marketing assistant for WATA, stated that the measure is in support of what the brand represents. “We always like to get involved and help wherever we can, because we know how important corporate social responsibility is – especially during this hard time. We understand that for university students, this is a crucial time in their lives and it requires being at your top level of energy and focus, which should be maintained by access to the right foods and staying hydrated with WATA,” Roberts shared.

In late November, Campbell handed over sizable product donations to the USUC. “I know this is just a drop in the bucket, but I hope my efforts and the efforts of others will help these students to persevere and get through this very difficult time in their lives,” she said.

The businesswoman, who has since been appointed a mentor with the university’s mentorship programme, is imploring other corporate entities and alumni members to come on board and support students.

For further information or to support the initiative, please call 876-387-1005 or email shareyourmeal@utechstudentsunion.com.