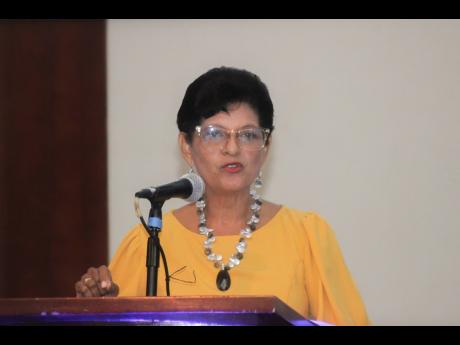 Leadership Specialist Dr Luz Longsworth speaking at the Frontline Honour Awards put on by the Montego Bay Chamber of Commerce & Industry, in collaboration with Sarah’s Children on Sunday.

Leadership specialist Dr Luz Longsworth has declared the ongoing COVID-19 pandemic World War III, this against the background of the fact that 2.5 million people have died globally after being affected by the virus, which has crippled normal life in many countries, including Jamaica.

“Make no mistake, this is World War III. This is the third world war that so many people have been predicting,” declared Longsworth in speaking to the devastating impact of the coronavirus. “This is our 21st-century war, which in so many ways is much more intense and deadly than World War II.”

Longsworth was speaking at an event put on by the Montego Bay Chamber of Commerce and Industry and the charity organisation Sarah’s Children to honour front-line workers for their role in the national effort to curtail the spread of the deadly virus.

The event, the inaugural Frontline Honour Awards, saw 31 front-line workers, inclusive of doctors, police officers, firefighters, soldiers, nurses, and other healthcare support staff, being lauded and awarded for their role in tackling what was a life and death situation.

Longsworth likened the COVID-19 fight to the battlefields of World War II, where young men and women were forced into fighting the tyranny of the marauding German army to blunt their attempt to curtail freedom in many countries across the world.

According to the respected leadership specialist, the enemy with whom front-line workers are fighting in this pandemic is an invisible one, one that constantly keeps nurses, police officers, soldiers, firefighters, doctors, and other healthcare workers on their toes.

“It is one (the virus) which is able to change shape and form like the transformers which some of your children play with,” explained Longsworth, a former principal of The University of the West Indies Open Campus, in Montego Bay.

“Like the world wars of the past, this enemy has taken lives. It is threatening our freedom. It has led to our economic decline, increased insecurity, and tremendous fear,” she said.

Longsworth further argued that there are those who are of the view that COVID-19 deaths should not be compared to the over 50 million deaths recorded in the six years of World War II, which raged on between 1939 and 1945, but she sees it otherwise.

“What we are not considering is that over 246 million people in every single country in the world, in every village, in every town across this wide world, have already been infected, and it continues to grow,” said Longsworth in looking at the impact of the global spread of the coronavirus.