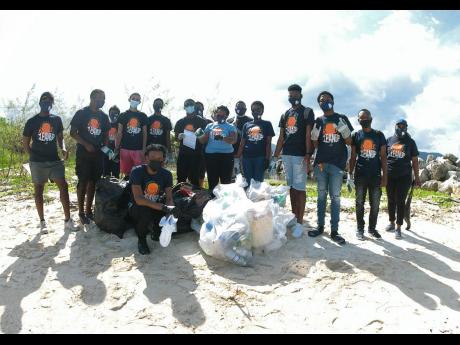 Contributed
Some members of the Edu-Enchrichment team at a coastal clean-up project at the Harmony Beach Park and the River Bay Fishing Village in Montego Bay recently.

“We should play our part,” were the encouraging words of Yakinie Mitchell, president of Edu-Enrichment Team (EET), to his members as they coordinated a coastal clean-up project at the Harmony Beach Park and the River Bay Fishing Village in Montego Bay recently.

According to Mitchell, while it was not the first time that his team was engaged in that kind of clean-up activity, they were nonetheless extremely excited about being a part of it. In 2018, they were also the coordinators of the Nuh Dutty Up Jamaica clean-up network, which saw them cleaning up the Dump Up Beach, which has since been renamed the Harmony Beach Park.

“Harmony Beach Park was far more encouraging and took a shorter time to clean up than previous years,” explained Mitchell. “The development of this property is a win-win for Montegonians. Back then, this place was known to have most of the garbage in the city. The recent facelift has contributed a lot to the site, as they have put in place garbage bins, which individuals should now make use of while utilising the property.”

Volunteers from several community groups across St James were present, including the Cornwall College Interact Club.

While the clean-up at the Harmony Beach Park went quite smoothly, it was a much different situation at the River Bay Fishing Village, where Tracey Cole Morgan and her group of volunteers encountered serious challenges.

“It took us more than two and a half hours to clean up, as the garbage on this property was too much,” said Morgan. “The odour and the waste on the beach were very discouraging, to a point where the volunteers asked if people really visit the site to purchase fish. I can honestly say it was worse than in previous years. One has to question if the Ministry of Health has ever visited the fishing village.”

Michael Meggo of the Cornwall College Interact Club was also taken aback by the situation at the fishing beach, as he never thought it was that bad.

“The experience was not only disheartening, but an eye-opener to the severity of the extent to which our land is polluted, especially at the fishing village. It became clear to me that the fight against pollution is very urgent, and our planet could be lost if we don’t do something about it,” said Meggo.

Because of the ongoing COVID-19 pandemic, JET provided all the volunteers with masks and constantly monitored them to ensure the health protocols were followed.

“The main objectives of this project were not only cleaning up trash, but also using it as an educational tool for those who were a part of it. It is vital for people to know the importance to reduce, reuse and recycle in keeping our environment safe and tidy,” said EET Vice-President Devar Morgan. “This will reduce the impact of the amount of waste that goes in our ocean and affect marine life and the environment. We have seen what waste does to our drain, and that’s just one thing highlighted, but waste can do a lot more harm to planet earth.”