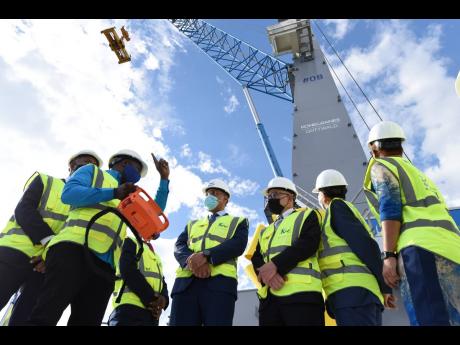 Prime Minister Andrew Holness says the Government is moving to restore Jamaica’s reputation as a leading maritime and port centre in the region by crafting policy to tap the ocean economy.

Speaking at the official unveiling to mark the start of US$60 million in infrastructural development projects on Wednesday at Kingston Wharves Limited (KWL), Holness said recent changes to the Cabinet will see a push for the integration of the blue and green economies.

The blue economy is an emerging concept that encourages better stewardship of the ocean or ‘blue’ resources. It includes established ocean industries such as fisheries, tourism, and marine transport.

Holness said the country has a maritime space exclusive for economic use that is 24 times its land mass.

“In that maritime space are significant assets which we will have to use in a wise way, in a sustainable way, that will see the use of the present generation not excluding the benefit and use of future generations,” he said.

“So we have to sit down as one country and plan how we are going to use these God-given natural assets,” he added, saying that it was a point of focus in the country’s 60th year of Independence.

That effort includes the US$60 million investment into three projects at Kingston Wharves that will see the redevelopment of Berth 7, an Ashenheim Road warehouse complex, and the addition of the eighth crane to KWL’s fleet.

Holness said in the last three decades of the 20th century, Jamaica progressively developed its reputation as a leading maritime and port centre in the region, but in the first decade and a half of this century, it gradually declined that competitiveness.

The prime minister said that Jamaica’s retreat from maritime and port leadership in the first decade and a half of the 21st century hurt its competitiveness.

He said that this was due, in part, to the Government’s inability to invest as aggressively because of very high debt levels.

The prime minister said Jamaica’s fiscal circumstances resulted in significant disinvestment in infrastructure and critical economic drivers such as the marine sector.

However, he said that the past five years have seen significant movement towards modernising terminal and port infrastructure.

“KWL has been making a series of investments, and, of course, those investment decisions have picked up steam in the recent past because there is a sense that we are getting our debt under control,” the prime minister said.

“We are getting our fiscal house in order. There is certainty; there is confidence in the economic environment of the country.”