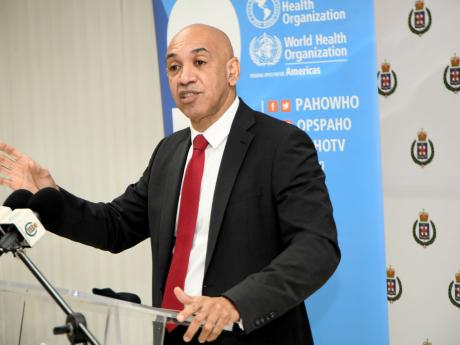 Anderson: “We don’t have a phenomenon of murders. We have people killing people. They are out there; they are murderers and some of them are doing it for hire. There’s no intervention that is going to assist them. These people make money from what they do and big money.” - File photo

With more than 60 murders recorded since the start of the year, Police Commissioner Major General Antony Anderson says the police have set sights on the tri-parish area in the west and the southern belt of the Corporate Area for extra policing.

Anderson was speaking to journalists after the handover ceremony of medical equipment to the Jamaica Constabulary Force (JCF) from the Pan American Health Authority this morning when he gave the update.

He said Westmoreland, Hanover and St James, in addition to the St Andrew South, Kingston West, Kingston Central and Kingston East police divisions, have selected themselves as areas of concern and focus for the JCF.

The commissioner said concerns have also arisen in the St Catherine South and North police divisions and that the force has “moved some assets there to bring that down”.

Anderson said the killings, 92 per cent of which have been committed using the gun, have been largely gang-related.

He said also that a number of them involve murder-for-hire deals.

“Westmoreland is something we have to move on and we are. I have deployed an additional 47 officers down there. We're looking at the leadership team there to reinforce it and build it. So they're getting a lot of attention,” the commissioner noted.

“The southern crescent [of Kingston and St Andrew] is an issue. As you know, we've put in the Zones [of Special Operations] in Central Kingston. Again, these zones take a lot of assets for reasonably small areas. That is why we manage how we implement them over time.”

At the same time, he reiterated concern for the spate of murders that have so far been committed but said that his worry does not stop there.

Anderson said specific plans are being orchestrated to push back against the violence being witnessed.

He added that these plans go beyond boots on the ground.

“We don't have a phenomenon of murders. We have people killing people. They are out there; they are murderers and some of them are doing it for hire. There's no intervention that is going to assist them. These people make money from what they do and big money,” he said, noting that the force must forge partnerships with the community by creating pathways and intervening to limit the number of people going into criminality.