New police station to be constructed in Lacovia, St Elizabeth 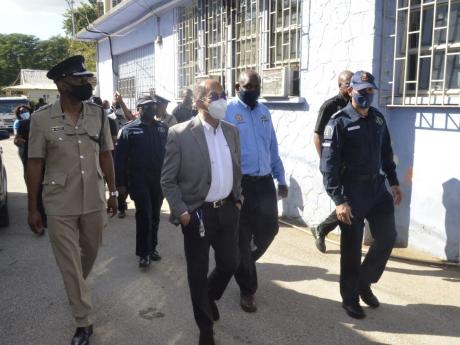 The Government is to construct a new police station in Lacovia, St Elizabeth, at a cost of $200 million, to further strengthen the crime-fighting capacity of the police in the division.

Deputy Prime Minister and Minister of National Security, Dr Horace Chang, made the disclosure during a tour of St Elizabeth on Thursday.

He told journalists that work on the new police station will start this year, noting that the upgrading of police infrastructure and facilities are imperative to reducing crime and violence.

“We took a look at the site. It has been on the map for some time [and] we expect to start this year. So, we are ready to go with that aspect of it,” Chang said.

In addition, he pointed out that there are plans to bolster and expand CCTV surveillance that has already been installed in Black River and Santa Cruz to support the police in identifying criminals as well as solving incidents of crime.

“Now that it is operating, we need to do everything to make it more efficient and effective. It was installed as a project and now the police have to take charge to ensure that it is operated fully in St Elizabeth,” Chang said.

“In Black River, it [CCTV] will make a significant contribution, to give the police better information and, therefore, a very strong tool in crime-fighting,” he added.

In the meantime, Chang lauded the work of the police in St Elizabeth over the years.

He said the men and women of the Jamaica Constabulary Force (JCF) are taking the required steps to achieve a sustainable reduction in crime and violence.

“We just came out of what is called the Christmas season, which is one of the hardest time for policing. [Police personnel] are out here seeking to keep peace and public safety. They have had some challenges, but we are aware, and I am aware that the police have the intelligence, the information and are working at apprehending… the hardcore criminals out there,” Chang said.

“We [Government] are looking at what we are investing in the JCF to improve efficiencies and capabilities, and I think it's going well and there is more to come in that area,” he added.

The tour took the national security minister to the Junction, Santa Cruz and the Black River Police Stations as well as the site for the Lacovia Police Station.