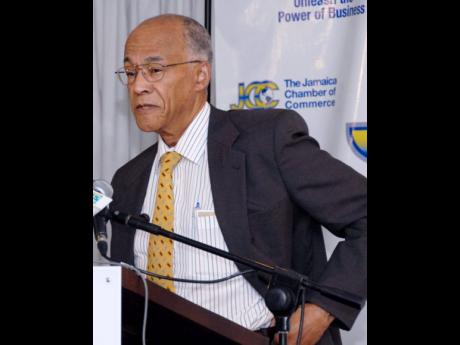 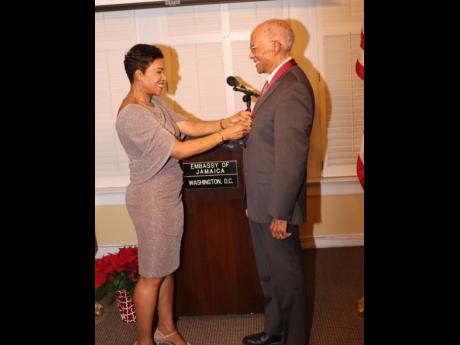 File
Jamaican Ambassador to the United States of America Audrey Marks pins Economist Professor Donald J. Harris, who was conferred with Jamaica’s third-highest national honour, the Order of Merit for his contribution to national development at a ceremony at the Embassy of Jamaica in Washington, DC.
1
2

The small business sector in Jamaica, which has the potential to spur economic growth, is the victim of a significant resource gap, both financially and in expertise, according to Stanford University Economics Professor Donald Harris.

He said that to get the sector moving, some important reforms must take place.

Noting that Jamaicans have a high entrepreneurial spirit, Professor Harris said the small business sector is lacking in adequate financial resources, as well as certain basic infrastructure such as water, proper roads and electricity.

“The small business sector should be the main source of investment and innovation, but the sector suffers from adequate financial input,” he said.

Professor Harris noted that progress has been made in this sector, but much more needs to be done if it is to fulfil its potential and drive Jamaica’s engine of growth.

He pointed out that major commercial financial institutions do not lend to the informal commercial sector,while the paperwork required is enormous.

“Large financial companies would rather lend to purchase motor vehicles, instead of providing loans to the informal commercial sector,” he noted.

“The small business sector in Jamaica, if properly nurtured and provided with the necessary resources, could become the growth area that provides sustainable wealth and help to alleviate poverty in Jamaica,” he said.

He further pointed out that debt is a major issue for the small business sector.

Professor Harris opined that while significant improvements have been made in the small business debt situation, the burden is still very onerous on the sector.

“There needs to be a focus on structural changes to small business, so as to unlock financial flow to the sector,” he said.

He bemoaned the fact that the required government management systems and structures needed for the sector is lacking.

“Small businesses should be able to call on such expertise to assist them in innovation and technology,” he said.

Professor Harris was recently presented with Jamaica’s third-highest national honour, the Order of Merit, at a function held at the Embassy of Jamaican in Washington, DC.

Professor Harris, who is the father of US Vice-President Kamala Harris, and who has advised Jamaican governments on economic matters, also called for a reordering of the country’s educational system.

He suggested that the system should be geared towards creating the necessary skills needed for growth and development.

Using Taiwan as an example, Professor Harris spoke of the need to develop an educational system that will allow the economy to flourish.

When the interview turned to his daughter, Vice-President Harris declined to engage on the subject.