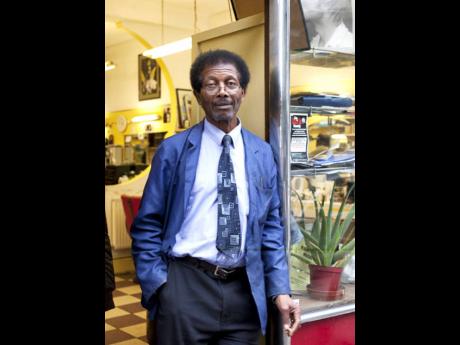 Clevent Ferdinand Artrey, popular known as ‘Gee’ and owner of Gee Barbers in Kensal Rise, northwest London, for over 50 years, passed away last December. He was 86 years old.

Gee Artrey successfully ran his barbering business at Kensal Rise, London NW10 up until August last year, when he retired from the business owing to failing health.

He was born in Browns Hall, St Catherine, Jamaica, where he learned barbering and shoemaking before he migrated to England in 1955. After working at various jobs in London, his real love of barbering took him to the Hairdressing Academy in the Strand, central London, in 1968, where he received his diploma in hairstyling.

He opened his first shop shortly afterwards in Great Western Road in Westbourne Park; then in 1969, he ventured into a partnership with another barber, Winston Daley, on Willesden High Road, which lasted for a year.

It was the following year, in 1970, that Gee Artrey decided to establish his own hair salon. Gee Barbers was born at Keslake Mansion, Station Terrace, London NW10, when he took over the lease for the premises which was originally owned by an Italian barber.

It was then that Gee Barbers became the cornerstone of the Caribbean community in Kensal Rise, which was regarded as the ‘university’ for the number of young barbers who learned their trade there. His daughter, Sandra Artrey, believes that Gee taught over 40 men to cut hair during his lifetime.

She said: “My father was a great mentor to these men. One said to me recently that he came to dad’s shop when he was 24 years old and asked for a job. My dad gave him the opportunity to cut a customer’s hair that day. When dad saw his talent, he gave him the job immediately, and that’s how my dad operated. He was always willing to encourage young men into the business.”

While Gee Barbers at Keslake Mansion was the main shop, Gee Artrey also operated other barbershops in Harrow Road, Harlesden High Street and Kilburn High Road. He had the staff to run them, many of whom he had trained, but it was the Kensal Rise location where he was based for over 50 years.

The shop was where some famous sports personalities and entertainers came to get their hair cut, including British soul singer Seal, who grew up in the area and was a regular customer, as well as reggae singer Jimmy Cliff, whenever he came to London.

Gee Artrey is remembered as a community man, as his Kensal Rise shop not only provided the service of cutting all hair textures, but it was also the meeting place for many who would drop in to discuss the issues of the day or just shoot the breeze.

He leaves behind his wife from a second marriage, seven children, 10 grandchildren and 15 great-grandchildren.