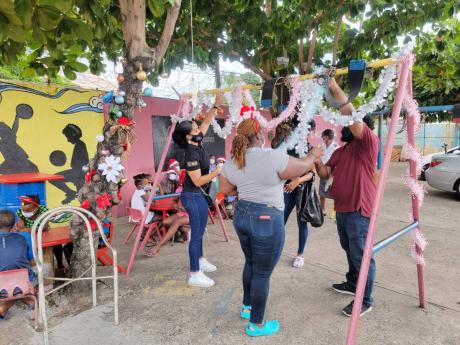 Contributed
Personnel from both Milin Real Estate and Lea’s Sugarcoated Treats work together to get The Nest playground decorated. 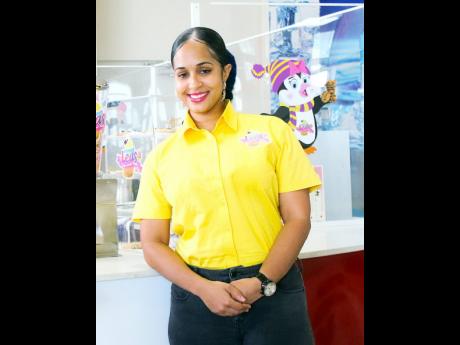 Stephanie Lyew
Vanacia Johnson-Lee, owner of Lea’s Sugarcoated Treats and host of Milin TV, partnered with Milin Real Estate for the treat at The Nest and provided a number of sweet treats.
1
2

With the opening of its doors, Milin Jamaica Real Estate had been looking for a window to get involved in the community and assist the most vulnerable members of society. Operating for a little under two years, the team has found what they are passionate about — children — and launched an initiative in December.

According to Michael Linton, chief executive officer of the newly established real estate company, it did not take long for the team to decide on a project. Having developed a relationship with the Nest Children’s Home while part of Calabar High School’s Key Club, he said the home was a fitting place to start.

“When I was attending high school, it became a norm to organise and execute various community service and mentorship initiatives for The Nest,” Linton shared with The Gleaner.

“For our initiative, we partnered with Lea’s Sugar-coated Treats; the proprietor of the company Vanacia Lee is a presenter for our Milin TV channel, where we showcase property tours. As fate would have it, we were planning a treat for the children of Nest. So it was an easy decision, and the team at Lea’s was very excited,” he continued.

He shared that the initiative, while it also involved giving physical items to the home, was focused on the interaction with the children and let each and every ward of the home know that they are valued by society. “It is important that Jamaica acknowledge the children who are wards of the state and make them feel loved,” Linton said, adding that “we strongly believe in the thought that children are the future… we were all once children”.

The treat left an even bigger impression on the hearts of the realtors and their associates, and now, Milin Real Estate has intentions to make the treat an annual event by adopting The Nest.

Exploring the idea of adoption, the real estate company executive said, “Our team wants to make this a long-term relationship; this would see us providing regular mentorship and assisting the home’s management on various issues. I was happy to have conversations with Captain Keith Haughton, who is in charge there, and he revealed that part of the reception we experienced was because the children felt like they were being considered and were surrounded by love and not forgotten.”

“We are still a new company and still experiencing the pandemic, but the interaction with the children was very heart-warming, well-received and we strongly believe that the only way out of this slump that Jamaica currently faces is through giving back, looking out for each other and protecting who is the future. We are an advocate of paradigm shift in Jamaica, and this is our way of taking the lead,” Linton said.