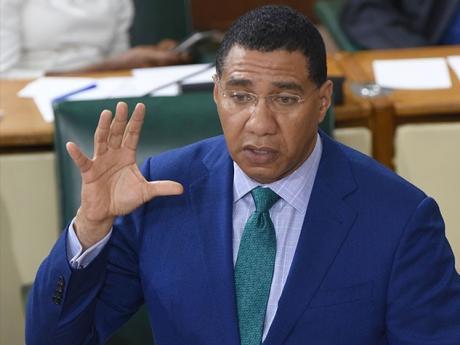 Holness: "I have full confidence in Minister Chang. In his knowledge, in his competence and in his heart, which is to ensure every single Jamaican is safe." -File photo.

Prime Minister Andrew Holness has declared that he has full confidence in his Minister of National Security Dr Horace Chang.

More than 60 homicides have been recorded in Jamaica since the start of the year.

Holness this morning defended the work of his national security minister.

Addressing a press conference this morning, he said that no partisan or political considerations influenced his decision to have Chang remain in the post amid a Cabinet reshuffle last week.

Chang is the general secretary of the ruling Jamaica Labour Party.

"I asked Dr Chang to take over the portfolio of national security before the last election. It is the most difficult portfolio in the country. It requires a long-term commitment to the plans that we have in place…[and] we are not going to change the current situation through the flip of a switch,” he said in reference to the leadership of the national security ministry.

“The problems are deep-rooted and they require significant structural, institutional, cultural and resource reform. These take time particularly the legislative, particularly the policy and the structure,” he continued.

He said that he believes in Chang's competence and sees no need to remove him.

“What you are seeing before you now is a police force that is far more intelligence-based than at any time ever. What you are seeing now is a direction of resources into our security apparatus that gives us domain control on land and at sea … and you will see the increased capabilities to find weapons and all of this is being done without taking any lives. This is the beginning of the transformation of our security forces into security forces that can be compared to security forces worldwide of the highest standard. It will take time. It, therefore, means that I cannot at this point, unduly interrupt the plans laid and the institutional knowledge that has been gained, which Minister Chang has been ahead of at the Ministry of National Security,” said Holness.

“I have full confidence in Minister Chang. In his knowledge, in his competence and in his heart, which is to ensure every single Jamaican is safe,” he declared.