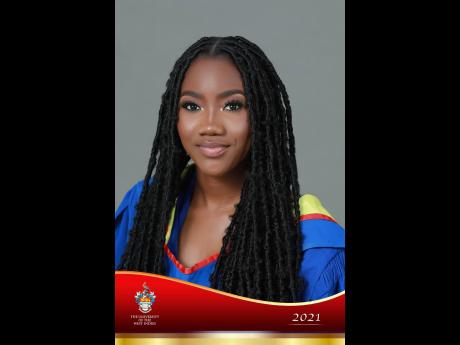 For many persons completing university, it takes a while for them to get a job. But not for Tashae Bowes, who graduated with first-class honours in actuarial science – one of the most rigorous programmes at The University of the West Indies (UWI) – as the job practically ‘fell into her lap’.

After graduating in November last year, she was offered an analyst position in the Wealth Management Operations Division of Morgan Stanley, a world-leading investment bank on Wall Street in New York.

As a UWI Open Scholarship recipient who served on the Guild Council as Irvine Hall chairwoman and the deputy vice-president of the UWI Students Today, Alumni Tomorrow Corps, where she was an ambassador for the vice-chancellor, Bowes was determined to create her own niche and stake her claim in the business world.

For persons observing her, it would seem like everything is a breeze for her and that she has it altogether. According to Bowes, persons seeing her from the outside would think that because she is always excelling, she had it all together – but she didn’t.

“I faced challenges like everyone else, my journey was never totally smooth. There were times when I was very overwhelmed and had mental breakdowns, but those who endure, conquer. I struggled the most with balancing university life in the initial stages,” she shared, pointing out that transitioning to university at 17, her first time away from home, and having to juggle studies and the new extracurricular activities she was involved in negatively impacted her grades for a semester.

But it was a wake-up call for her and resulted in her being able to better manage her time wisely.

Bowes, who hails from Nain in St Elizabeth and attended Manchester High School, told The Gleaner that she had always been deeply passionate and good at the disciplines of math, economics and statistics.

“I was then at a crossroads, where I needed to find a career that encapsulated all three so as to eliminate me having to compromise. Then, a mentor of mine, former Rhodes Scholar Chevano Baker, introduced me to the actuarial science programme at UWI, which he was enrolled in at the time,” she informed.

Bowes said she read the programme outline and it was perfect for her – a dash of all three areas wrapped in one.

At one point, she said, she had concerns on whether she only liked some aspects of math, or if it was an all-round niche for her. It was this concern that saw her challenging herself to sit every mathematics exam the Caribbean Examinations Council had to offer – Caribbean Secondary Education Certificate (CSEC) math and add math, and the Caribbean Advanced Proficiency Examinations (CAPE) papers in pure, integrated and applied math, receiving a distinction in all of them.

Her accomplishments erased all doubts and she knew with all certainty that there was something deeper there for her relationship with the subject.

“I was ranked in the top 10 in the Caribbean in CSEC and both years of CAPE. My love for it went far beyond the classroom, as I was tutoring students from different schools online as early as third form and taught classes at my church on Saturday during the summer,” she revealed.

Bowes, who states that she is a strong believer in Christ and is faith-driven, said she honestly didn’t expect that her career would pivot so early. Still, she credits her family and mentors for the confidence instilled in her, as, she said, they believed in her even more than she did in herself.

“My parents are my biggest fans, I couldn’t ask for better. I remember days in high school studying and my mom would read my textbooks and create questions to quiz me at the end of a chapter; and days when my dad would drive from St Elizabeth to bring me breakfast at UWI, when I had exams, so I wouldn’t have to cook. They, along with my extended family and friends, are my heroes and the reasons I will always keep pushing,” she shared with gratitude.

Sharing her joy in working on Wall Street, Bowes said the overachiever spirit in her never ceases and for her, this is just the beginning as she still has a long way to go.

“The work environment is, however, extremely competitive. I work with some of the brightest minds, and persons who are way more established in their careers; but I don’t see that as a deterrent, I take it as motivation,” she quipped.

Bowes said her top priority is to inspire fellow Jamaicans and young minds to never limit themselves and to know that everyone’s journey won’t be the same, but if at least one person is inspired along the journey, then you’re doing a good job.

Looking ahead, Bowes said she is exploring her options but for now, her short-term plans include starting her master’s degree studies in the US and possibly spreading her wings to becoming a chartered financial analyst, financial risk manager, or doing the Society of Actuaries exams.