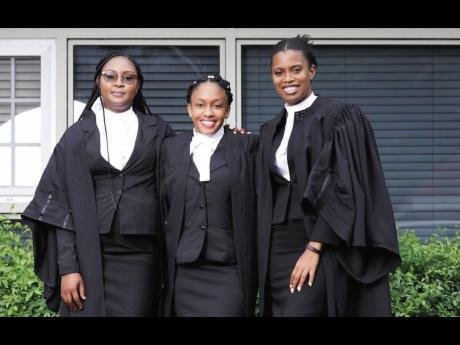 Contributed
From left: Kimberlee Edwards, Shantel Phoenix, and Tashana Wilson after they were called to the Jamaican Bar in December 2021. 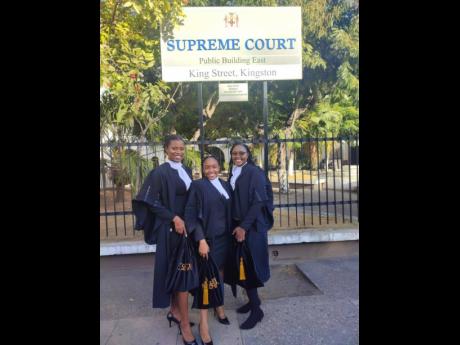 Contributed
From left: Tashana Wilson, Shantel Phoenix, and Kimberlee Edwards outside of the Supreme Court in downtown Kingston.
1
2

Their personal journeys led them on different paths, but with perseverance, they were reunited in 2019, this time, on the final leg to being called to the Jamaican Bar.

Now, the three work together as legal interns at the National Land Agency and harbour dreams of opening their own law firm.

Edwards knew she wanted to be a lawyer since she was eight years old, but her financial circumstances were not ideal, and her family had no history of education beyond high school.

Determined to make a difference, she sought inspiration from her godsister, church family and renowned motivational speaker Les Brown.

She applied for the law degree at the University of Technology (UTech), Jamaica because of its affordability but was unaware that she would have to sit an entrance exam to earn a place at the Norman Manley Law School upon completion of the degree.

Though she had taken a loan from the Students’ Loan Bureau (SLB) to finance her studies, she needed an income for daily expenses.

“I worked various jobs while going to UTech. I was a waitress, and I am very talented, so I braided my classmates’ hair to earn money,” she said.

Edwards recalled being at UTech several nights preparing for the entrance exam under trees and sleeping on cold desks as not all members of the study group had financial clearance to get access to the library’s study room.

She failed on her first attempt at the exams and had doubts about whether she was capable of becoming a lawyer.

It took experience from being an intern at Samuda & Johnson and watching others working in the field to convince her that she could.

She made audio recordings of her notes and used every bit of time available to study – on the bus as she journeyed from Old Harbour to New Kingston and during her lunchtime.

Phoenix’s interest in law harks back to after-school visits to her mother’s place of employment, where she worked as a paralegal.

“I read through my mother’s legal books and often told her that I’m reading so that when it’s my time to go to university, I’ll be ahead of the class,” she said with a chuckle.

She enrolled in the political science programme at The University of The West Indies (UWI), Mona, because of space constraints at the Faculty of Law.

Phoenix had not earned the 3.5 GPA required for transfer to the law programme after completing a year of studies, but to her surprise, an acceptance letter was at the office, waiting since May 2015.

It was now August 2015 and preparations were already being made for her to enter her second year in the political programme, with the SLB.

The law programme cost significantly more than the one she was undertaking, and Phoenix thought about how the remainder of the funds would be sourced as the SLB only granted her a portion of the tuition.

But she was reassured by her mother, who said, “Your passion is law. You got in. We will work it out.”

Phoenix took a leave of absence at the end of year two due to financial challenges but was able to return and complete the law degree in 2019.

For Wilson, working with children is her lifelong desire.

She was torn between pursuing social work and law but chose the latter as it would allow her to make a greater impact.

She enrolled at UWI’s Faculty of Law immediately after leaving high school, but she, too, encountered financial difficulties.

“SLB did not cover the full tuition, but I made it through the first year because my mom had been saving. However, by the time I got to second year, that would’ve been depleted because she had saved for a degree that cost much less than law,” Wilson recalled.

She withdrew from the programme to work for two years, got the support of her church family at Old Harbour New Testament Church of God, who pledged to pay a portion of the fee and also benefited from further financial support from her mom and stepfather to resume studies.

Throughout their journeys, they communicated with each other from time to time and were up to date on their progress.

When Wilson got to Norman Manley, the SLB covered her tuition, and she received a grant from her church to help purchase books while she juggled two jobs.

“I worked at a marketing firm, and I was also an admin assistant. My employers were really understanding, and they gave me time off during exam time to study,” Wilson said.

For her, it was comforting to know that she had two colleagues on the final leg of her journey to becoming a lawyer as the students she started with at the faculty had gone ahead of her.

“My delay brought me to Norman Manley with two awesome young ladies: Tashana and Kimberlee. Norman Manley was rigorous, and without them, I don’t know how I would’ve made it through,” Phoenix chimed in.

Meanwhile, Edwards told The Gleaner that at Norman Manley Law School, they were inseparable.

She was the only one on the evening shift, as she was employed, but technology allowed them to study together into the wee hours of the morning.

“I needed extra time to learn the material, so even though exams were in May, we began to study from September, at the start of the semester,” Edwards said.

Wilson explained that they would split the workload and then host Zoom meetings to compile, discuss, and clear up grey areas.

All three young women shared that while completing the undergraduate leg of their journey, there were bouts of disappointment and feelings of being left behind, but Jeremiah 29:11, which says, “For I know the plans I have for you, declares the Lord, plans to prosper you and not to harm you, plans to give you a hope and a future”, was a sponsor of their race.

“It may seem as if the odds are stacked against you, but it’s about what you want and how hard you are willing to work to make your dreams a reality. It is also important to surround yourself not only with people who believe in you, but also people who are willing to work with you. That’s what I found in the friendship I share with Kimberlee and Shantel,” Wilson remarked.

Though they have been called to the Bar since December, it has not yet settled in that they are attorneys-at-law.

Phoenix has an interest in conveyancing and family law, Edwards wants to branch off into tax law or conveyancing, and Wilson is leaning towards corporate and property law.