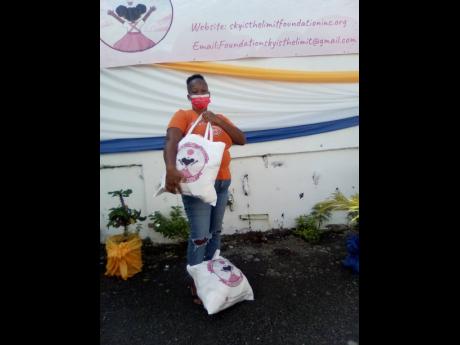 Contributed
Melissa Richards showcased the two packages, collected on behalf of her neighbours. 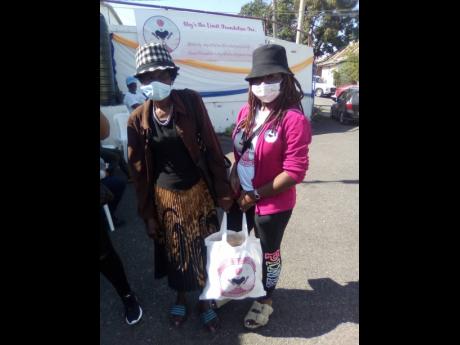 Eighty-two-year-old Miriam Moore was thrilled to be among scores of residents who turned out in Linstead, St Catherine, at the Sky’s the Limit Foundation Inc treat on January 15.

“I am feeling very happy for the bag of grocery, as the lickle money mi have can now pay mi light bill,” Moore said.

“January can be a hard time, so this help will go a long way. I am praying for continued blessings,” she added.

For The Queen’s School student, Sashane Dunn, the receipt of a laptop computer will aid in her School-Based Assessment.

The 10th grader said that the donation was timely and would give her greater flexibility in completing her projects.

“This is a good feeling to get help for those in need,” she told The Gleaner.

“The two bags will aid the needs of these two community members. They are unable to be here, so I make it a duty to help out.”

The charity organisation hosted the third staging of the event on the compound of the Linstead Community Development Committee (CDC). Volunteers offered goodie bags to those who turned up.

“We are very pleased to see good community spirit at work and it’s a pleasure having the function here today,” CDC President Devon Smith said.

She revealed that the foundation was registered in Maryland, USA, after she observed a mother struggling to adequately feed her family.

“I vividly remembered seeing this mother enter a shop in Ewarton, ordered three eggs, a quarter-loaf of bread, and a small amount oil for her five children,” Wilson said.

“I felt her pain and an urge to help, as it was obvious to me something was wrong. It was then made clear to me she was unable to feed her children properly,” Wilson, who was born in St Catherine, said.

The foundation started out as a small venture, but expanded over time.

“While we give back to those in need, there are plans in the near future to do workshops and training seminars to help empower people,” Wilson said.