Anger boils over at NWC amid road nightmare

From falling into hole to dug-up sidewalks, residents fume at sewerage works 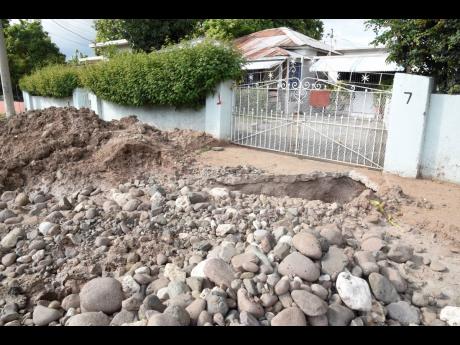 Nicholas Nunes/Photographer
A driveway and sidewalk on Dahlia Avenue are impassable because of mounds of mud and stones displaced by sewerage works by NWC contractors on Tuesday. 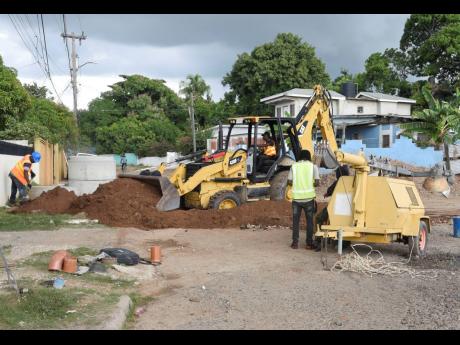 Nicholas Nunes/Photographer
A tractor scoops up dirt along Dahlia Avenue, off Bay Farm Road, to fill a hole after sewerage lines were laid by NWC-contracted workmen on Tuesday.
1
2

Residents in Waterhouse, St Andrew, are outraged at the state of community corridors linked to Bay Farm Road amid the installation of sewerage pipes.

The affected roads are Dahlia and Verbena avenues, where work has been ongoing since December, causing inconvenience for residents.

One such nuisance is the partial dismantling of some sidewalks, while others are covered with mounds of dirt that are transformed into a muddy mess after heavy rainfall, obstructing pedestrians.

Householders are fuming at the National Water Commission (NWC), arguing that they were not advised of the timeline of the works. Some say the displacement has made it difficult to enter their yards, while others have had to park far from their gates because of holes dug by excavators.

“We not even get notify say this a go go on in the community and how we feel about it, or nothing like that,” said Kevin Nelson, a resident, adding that he woke up one day to find workmen on his street.

Bridgette Daley, another householder, said she fell into a crater last Tuesday while on her way home from work. The hole was not visible, she said, as the road was flooded.

Describing the experience as terrifying, Daley recounted how she was trapped down to her waist when she plunged into the chasm.

A neighbour across the street noticed her fall and reached out to someone to offer assistance, she said

Daley's slippers remain as a warning to other passers-by not to tread that path.

Nelson explained that the neighbourhood conditions are so bothersome that he and his girlfriend have had to place plastic bags on their feet and walk with their shoes in their hands.

Sharing similar sentiments, a local bar owner expressed dissatisfaction with a dust nuisance that has dogged the community. This, she said, has caused a nightmare for her, as her counters are covered in dust shortly after cleaning them off.

Workmen informed The Gleaner that they were contracted by the National Water Commission to install sewerage infrastructure.

They estimated that the work would be completed within the next two months. The next stage of work is expected to have an impact on Bay Farm Road itself, they said.