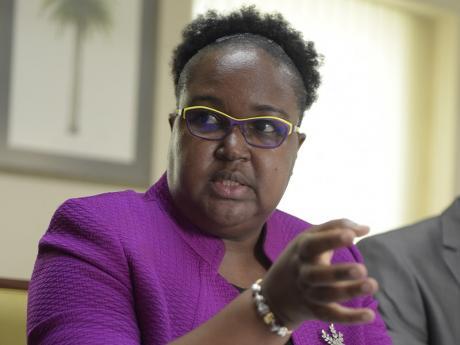 Grace McLean has been barred from returning to work until it’s decided whether she will have to pay back some of the $124 million at the ministry that allegedly cannot be accounted for.

She has been barred from returning to work until it's decided whether she will have to pay back some of the $124 million at the ministry that allegedly cannot be accounted for.

Her attorney, Queen's Counsel Peter Champagnie, confirmed this morning that McLean received a letter from the government late Wednesday advising of her interdiction until Financial Secretary Darlene Morrison determines whether she will be surcharged.

“We await the ultimate decision to decide whether we will challenge it in the courts. If the substantive response is unfavourable to us, we will seek the intervention of the courts,” he said.

Champagnie said the remuneration terms of the interdiction are to be settled in the next five days.

He said McLean has insisted that the surcharge proceedings instituted against her are unwarranted.

McLean's paid leave was scheduled to end Wednesday after she was sent home last October after two law-enforcement agencies launched investigations into $124 million in unaccounted-for payouts to the Cecil Cornwall-chaired Joint Committee on Tertiary Education (JCTE).

The surcharge recommendation was made by Auditor General Pamela Monroe Ellis following her audit of the funds paid over to the JCTE, which refused to submit documents after claiming it was a private entity.

A similar action was also recommended against Dean-Roy Bernard, the permanent secretary McLean replaced when he was reassigned to the Finance and the Public Service Ministry as director general.

He challenged his transfer and the courts said his position of Permanent Secretary at the Education Ministry should not be filled until the matter was determined.

A judicial review is expected to commence later this year.

In her 2021 annual report released last week, the auditor general said Bernard is responsible for approximately $113 million while McLean's was accountable for the remaining $11 million.

Cornwall had claimed that his JCTE Limited was a private entity but the auditor general contended that she was only interested in funds transferred to the government entity with a similar name.

Monroe Ellis argued that if Cornwall's position is accepted, the matter must be probed to determine whether a fraud has been committed by a private institution using a tax registration number for a government institution to receive money.

The Government's JCTE was established in 1991 and Cornwall registered his JCTE Limited in February 2019.

The body was set up as an advisory committee comprising tertiary education institutions.

According to responses submitted by the ministry to the auditor general, the establishment of the JCTE as an advisory body under the Education Act was not fully completed.

The JCTE morphed into a group that started offering courses.

Under an arrangement, the ministry paid over funds for the administration of the courses as well as membership fees to the JCTE secretariat.