JNSC grads out in the cold after nearly two-year wait for certificates; army urges them to make contact 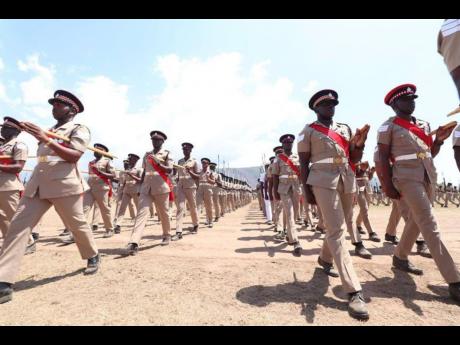 File
Members of the eighth intake of the Jamaica National Service Corps during their graduation at Up Park Camp in St Andrew on March 9, 2020. Some members of the batch have complained that they have been finding it hard to secure employment as they are yet to receive their credentials.

Past participants drafted into the Jamaica National Service Corps (JNSC) to become agents of positive change in their communities are expressing frustration at delays in getting their certificates after completing the yearlong military-like journey.

Launched in 2017 and executed by the Jamaica Defence Force (JDF), the JNSC targets youth aged between 18 and 23, equipping them with military, vocational, and life skills. The programme has somewhat become the standard mode for enlisting persons wanting to join the JDF, while some graduates move on to pursue careers in the Jamaica Constabulary Force, the Department of Correctional Services (DCS), the Jamaica Fire Brigade, the Jamaica Customs Agency, the Passport, Immigration and Citizenship Agency, and the private sector.

A number of graduates, however, have reportedly been experiencing challenges landing jobs as they are yet to receive their completion certificates and record of service, which give information in relation to their qualifications, inclusive of any special accomplishments or contribution to the force.

On Wednesday, Lt Col Denston Smalling, the programme's welfare officer, told The Gleaner that he was unaware of any such complaints made to the JDF and urged participants to reach out to the army to have any issues resolved.

One participant in the programme told our news room that having graduated in March 2020, only transcripts have been made available for many of his batchmates in the eighth JNSC intake as administrators have reportedly told them that they are having difficulties locating their certificates.

“Why they cannot find it? I have no idea. I keep calling and they keep saying to give them some time. I have been giving them time from 2020,” he complained.

“Majority of my friend dem are at home,” he added, noting that without the documents, they have nothing to show their employers as some of them were “stranded” as they also did not attain subject passes at the end of their secondary school studies.

The graduate said that the army reportedly informed them that they could apply for jobs as correctional officers, saying that the JNSC administrators would have sent over their qualifications to the DCS.

“But I know nothing never go so easy,” he said, adding that he was lucky to land a job as a security guard last year after his employer took a chance on hiring him when he only had his training certificate.

Having been exposed to first aid, library studies, mathematics, communication skills, and other areas, the final document would have detailed the various subject areas in which the graduates were qualified.

Like his batchmates, the graduate is hoping that the issue will be resolved soon.