VTDI workers protest over pay and other issues 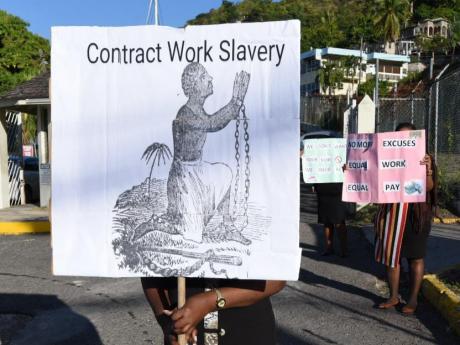 Some of the protesting educators said they want to become full-time employees at the VDTI, entitled to the benefits of civil servants and not have to continue on three-month contracts for years on end.

Staff at the Vocational Training Development Institute (VTDI) on Gordon Town Road in St Andrew withdrew their services this morning to protest pay and other contract issues.

They claim to have been forgotten by their employer and now want the Office of the Prime Minister to intervene in their matter.

But the workers also say there has been no direction since the recent merger of HEART Trust with National Youth Service, the Apprenticeship Board and the Jamaican Foundation for Lifelong Learning.

Last November, Education Minister Fayval Williams asked the workers for patience after they engaged in a two-day sick out.

Calls made to Williams on Thursday went unanswered.

Carolyn O'Connor, acting head of the School of Applied Technology at the VDTI told The Gleaner that there have been meetings at the Labour Ministry with HEART.

The National Council on Technical and Vocational Education Training has also met with the ministry.

"Basically, HEART has not come back to the table," O'Connor told The Gleaner.

"We gave them a 13 point-issue that we have. Only two of those 13 points they have looked to address,” she said.

Some of the protesting educators said they want to become full-time employees at the VDTI, entitled to the benefits of civil servants and not have to continue on three-month contracts for years on end.

O'Connor has been acting head of the VTDI's School of Applied Technology for six years.

A senior manager in a similar position is due to retire in March.