‘Paint the City, Paint the Town’ moves to Hanover 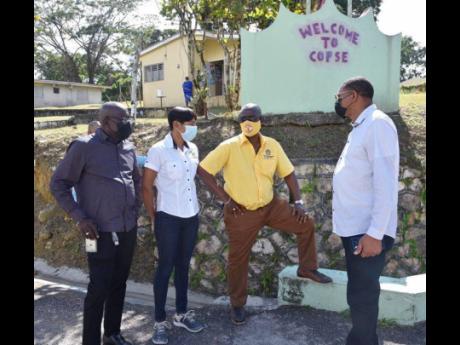 THE HANOVER capital of Lucea and the town of Hopewell, also in the parish, will both benefit from beautification works in the coming weeks, as the Ministry of Local Government and Rural Development’s ‘Paint the City, Paint the Town’ project is rolled out across the island.

Minister of Local Government Desmond McKenzie made the announcement on Wednesday, as he stopped in the town of Hopewell, in eastern Hanover, as part of what he says is his regular visits to communities that have been identified to benefit under the rural development programme.

His visit took him over a three-day period to potential projects and sites for implementation across the parishes of St James, Hanover and Westmoreland.

Elaborating on the ‘Paint the City, Paint the Town’ programme, McKenzie stated that it was originally intended for the Corporate Area alone, but the decision was taken for it to be extended to rural towns across the country.

“The purpose of it is to put a coat of paint on some of the old buildings, change the sidewalks, put in street signs and a whole lot of structure. So what we have done, we have expanded the programme to include all 14 parishes across Jamaica; and as I said before, Brown’s Town is fully advanced, the Corporate Area is fully advanced, and Lucea and Hopewell will be included,” he stated.

“What that does is to provide temporary and permanent employment,” he emphasised, adding that there will be several artists and artisans who will be engaged under the programme.

McKenzie noted that with improvement work taking place on the Hopewell Market, and similar work set to take place at the Lucea Market, both locations have been included in the ‘beautification’ of the towns.

The minister further explained that the programme is funded directly from the Consolidated Fund out of the Ministry of Finance, adding that the estimates for both Hopewell and Lucea will cost between $16 million and $18 million.