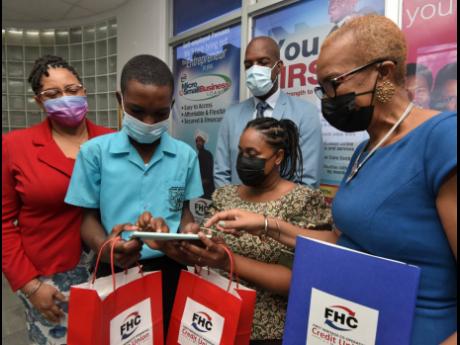 Ian Allen
Ajaune Johnson (second left), student of the Windsor School of Special Education, gets pointers on how to operate a tablet computer from Education Minister Fayval Williams (right) and his teacher, Kharole Chin-Graham (second right), after the device was presented to him.

Special-needs children are being left farther behind with online schooling when compared to other students, a senior teacher at the Windsor School of Special Education has said.

Kharole Chin Graham, who teaches at the Spanish Town Unit where they cater to students between the ages of 13 and 18, told The Gleaner that her students benefit better from hands-on teaching because of the practical aspects.

“It was really difficult because our students are really hands-on and it is more practical for them and we cannot do practical lessons online. So, to have the lessons online was really challenging because all we could do was show them videos, and their attention span is very short. Sometimes, we would be calling them from now until tomorrow and they are not answering because Mommy has gone to work and they are left alone and they just log on and mute the microphone and so we can’t reach them.”

This revelation was made on Tuesday at the handover of 10 tablet computers to the school by the FHC Foundation and First Heritage Co-operative Credit Union at its Portmore, St Catherine, office. Ajaunie Johnson, who attends the unit in Spanish Town where Chin Graham teaches, had been using his mother’s phone but is disenfranchised whenever she goes to work. He and another student from the Portmore unit each received a tablet, with the other eight destined for the Denbigh Show Ground unit, where the students have been suffering even more.

“The students in May Pen are really in need of the tablets down that side because the rural people don’t really have the job opportunities as others would have in the suburban areas. So they really need the help. Students in May Pen spent a lot less time online than the students from Linstead, Spanish Town and Portmore,” the senior teacher revealed.

While her organisation was unaware of these issues, acting branch manager of the FHCCU Portmore branch, Tania Oglesby, told The Gleaner that they had targeted special-education students to provide assistance. Between the FHC Foundation and FHCCU, they have earmarked 100 tablets for distribution, 50 of which have been given out so far.

“This is in keeping with the ethos of the credit union, which is people helping people. And we recognise the importance of education and especially for special-needs children, and so this was one of the institutions that we selected to give to,” she said.

Based on a World Bank study, Minister of Education and Youth Fayval Williams recently disclosed to Parliament that “the fiscal impact (over and above what we are currently spending) to support the health and safety requirements for opening our schools is going to be in the order of $2.4 billion to $3.9 billion annually for one to two years.

“This includes the cost of re-enrolment campaigns and outreach activities, providing targeted support for the most at-risk students, mitigating and preventing dropout and facilitating remedial education to minimise learning loss. The World Bank concluded that the long-term cost of inaction is in the order of $828 billion, approximately 40 per cent of Jamaica’s GDP,” she said.