EOJ says electors may request multiple letters of identity at once 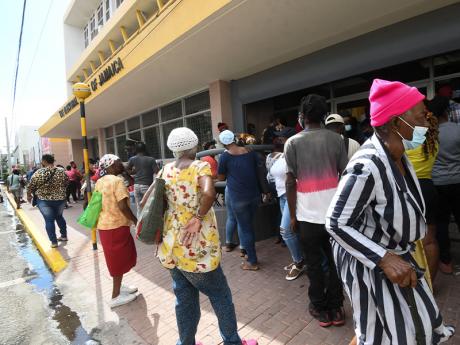 A crowd gathered outside the Electoral Office of Jamaica in Kingston. Many Jamaicans came out in order to register and others to collect their new voter identification card.

There have been reports of crowds at the EOJ's head office in Kingston as persons rush to get their letters since their ID cards have expired.

Requests for letters of identity at the EOJ's head office at 43 Duke Street, Kingston, are now being processed as a next-day service and in two to three business days at constituency offices.

"We have made the letter 'open' so it can be for multiple uses and the current letters that we are issuing is valid until the end of February," said Public Education Officer at the EOJ, Daynia Harper.

Harper said a number of institutions require that the letter of identity is addressed specifically to them and so the EOJ has been allowing electors to make that request.

At the same time, Harper said where electors require letters for several institutions, they should find out the requirements of each entity, before requesting the letters of identity.

Harper said the EOJ has been in constant dialogue with financial institutions and remittance agencies that require identification from customers.

The EOJ is asking these institutions for leniency, where possible, with electors who present the EOJ-issued letters of identity.

Features of a letter of identity

1. It is a secure document that bears the signature of an EOJ official as well as the stamp of the EOJ.

2. It also bears the identity information and photograph of the elector

3. It is printed on security paper with security features that cannot be photocopied.