Man freed of firearm offences after a year in jail 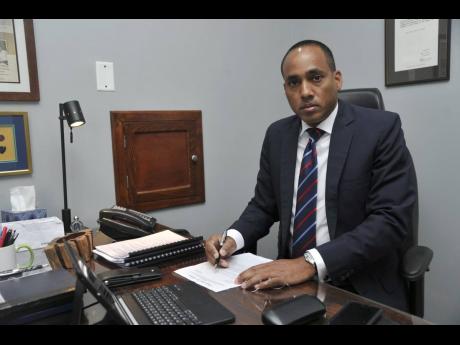 A man who spent a year in custody on false charges brought against him by the police wept in court last week when the judge told him he was free to go.

“Unno don’t know what I went through,” was all 34-year-old barber Xavier Thompson, of a Kingston 11 address, had the energy to say when he realised that he would be released from custody.

The outcome of this case has led attorney-at-law Peter Champagnie, QC, who represented Thompson, to call for a the need to “move from this practice of merely the say-so of a police officer, asserting that a firearm was recovered because we now have the technology to do further tests, as was done in Thompson’s case.

“This case represents the latest example of many where it is imperative [to] ... as a matter of course have illegal firearms purportedly recovered from accused persons tested for DNA or fingerprints,” Champagnie said.

Thompson’s ordeal began on the afternoon of December 16, 2020, when he was shot and injured by a policeman.

He was walking towards two policemen, who ordered him to put his hands in the air. Although he obeyed, one of the policemen pointed his M16 rifle in Thompson’s direction and fired, hitting him. Thompson was hospitalised for about three days and then taken to a police lock-up.

According to the policemen, when Thompson was ordered to put his hands in the air, he pulled a firearm from his waistband and pointed in their direction. This resulted in one of the policemen pointing his M16 rifle and firing at Thompson. The cop testified in the Gun Court in Kingston that he fired his weapon out of fear of being shot by Thompson.

The policemen said Thompson ran after he was shot, and they followed a trail of blood that led them to a house, where Thompson emerged using a little girl as a shield. On searching the yard, the police said they found a gun resembling the one Thompson had in his possession.

Under cross-examination by Champagnie and attorney-at-law Javed Grant, who also represented, Thompson it was revealed that the man had been shot in his back.

The police also admitted that they did not see any blood in the area where the gun was found.

Champagnie pointed out that the police version of what happened was incredible and was inconsistent with the area on Thompson’s body where he received the gunshot injuries. He said also that Thompson was shot in his back, without justification, and said further that the gun was planted.

Champagnie told The Sunday Gleaner last week that one of the strong points in Thompson’s case was that the gun purportedly found in the yard was subjected to ballistics and DNA testing and the tests did not suggest that Thompson came into contact with the firearm.

He said there was also no gunpowder residue on either Thompson’s hand or the firearm, and that no blood was found on the weapon.

The Independent Commission of Investigations (INDECOM) was part of the investigation and had tests conducted in respect of the firearm, Champagnie said.

The attorney said that INDECOM took an interest in the case because of the way in which Thompson was shot.

“Crime is overwhelming in Jamaica and it is all the more reason the evidence presented in court must be cogent to avoid any miscarriage of justice,” Champagnie added.

Thompson said he had a very rough time in custody and was constantly worried about the well-being of his three children and their mother.

“Although I am upset that I had to spend a life of living hell in jail, what I would like right now is a job so I can take care of my three children,” he told The Sunday Gleaner.