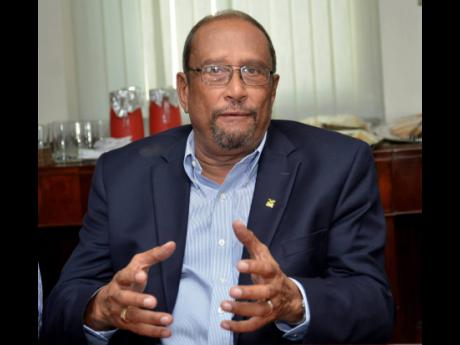 Howard Mitchell loves Jamaica. Passionately. Jamaica has always been the bright, beautiful and feisty girl he wants to marry. He has worked to please her, win her love, and finally gets her to say “I do”. After a rapturous honeymoon, all he wants...

Jamaica has always been the bright, beautiful and feisty girl he wants to marry. He has worked to please her, win her love, and finally gets her to say “I do”. After a rapturous honeymoon, all he wants is to protect Jamaica, his beloved.

But the years of bliss, hope, laughter, opportunity are fading, rapidly, and he now fears that Jamaica has not loved him like he loves her.

Jamaica has also given birth to children, seemingly without souls, who must fight their way in a society now brimming with inequality, pain, blood, greed, cruelty, falling standards, crudeness and crass and, even though she still has the ability to make him laugh heartily, there is lingering pain in the marriage.

Mitchell is acutely aware of all her shortcomings and is disappointed that some of her children have soiled her good name by marking their fingers in blood. Others have not cared for their fellowmen like she has cared for them. Some worship money more than life, while deviant behaviour is widely displayed in others. Those in leadership have not only failed their mother, but are failing in their place in the world.

Despite all this, he has pledged not to divorce her.

It was that sense of disappointment that Mitchell felt last Wednesday as he spoke with The Sunday Gleaner, that the mutterings under his breath were not fit for public consumption. Frustration was evident. Disappointment was clear.

But, as he stood up for greetings, he still had fight and hope that the marriage will turn around.

Inequality, he said, is one of the worst offsprings of Jamaica’s womb. It’s a position that is held by several other of her noble sons and daughters; its widening tentacles have pushed many to the brink of no return. That – and the loss of respect for human life, the erosion of morals, the failure by the Church and schools – has made Jamaica unattractive, but Mitchell still believes there is far more beauty to be unearthed in his belo Jamaica.

The process of rebirth must begin with a cease and desist in the neglect of human capital or the nation’s history will be written in even more blood, he warned.

“We must stop it. The culture is life-negating and we have cultivated a culture of monsters,” he told The Sunday Gleaner.

“We have to do something about it quickly because it will destroy our society. We know what to do. The prescriptions are there. Herbert Gayle (social anthropologist) has it. Professor Gladstone Hutchinson has the prescription. There are prescriptions there and we have to start with rescuing our human beings in the society,” Mitchell stated, referencing Gayle, a University of the West Indies academic, and Hutchinson, an economist at the Lafayette College in the United States.

“You have to understand that, unless you spend money on people and not [solely] on infrastructure, infrastructure will be of no use to you. People first. We have to save our people from destruction. And yes, it is going to take money, time and a national consensus. So, as long as you play the politics with the budgeted infrastructure, we are going to be in the same position,” he stated.

Explaining further, he said, the annual Budget presented to Parliament has more to do with “things than with people”.

“The concentration of the Parliament is who can get the benefit of the things in their constituency or their parish, rather than ‘Are the people getting human value, development value from these budgetary expenditures?’. And you can hear it in how our ministers talk,” he argued.

Continuing, he said: “It takes an average, and that is the problem we have on our hands. We are not looking at the objective conditions of our population and applying resources in a way to uplift those who are down, while keeping the opportunities for those who are up. Until we develop that mindset, we are going to be creating more contract killers and merchants of deaths,” an agitated but passionate Mitchell said.

The annual Budget, he said, has become a box-checking exercise for the benefit of Jamaica’s creditors, and almost meaningless to the majority.

Mitchell’s anger is directed at many who have benefited from the country, but who he considers are not giving back as they should. The continued starvation of human development is making Jamaica increasingly unattractive to everyone.

“I am saying that what we have done is fall for the International Monetary Fund formula, where you put in good roads, bridges, buildings, improve the quality of schools in terms of materials, and it is all good. But we are still forgetting the human capital,” he said.

Good roads, bridges, and schools, mean nothing to people whose lives are in the gully of life’s bottom half, he said.

“The fact that the society is dehumanised, we have no consideration for each other, we have lost the ability to care, and it is widespread. It bothers me that a small country like this, with the history that we have, of caring, despite the history of the plantation, where we looked after each other, it bothers me what we have become to the point where I no longer can tell you that I have the degree of pride in my country that I used to have,” he said with sadness but resolve.

“I have lost a lot of my belief in Jamaica because I don’t believe that my fellow Jamaicans care. A lot of my feelings is directed at some of my peers who have fallen prey to the look-after-myself syndrome. And this is a big part of why the political directorate has become so powerful,” Mitchell said.

A functioning society, he said, stands on three pillars. The first is the political directorate; then civil society, social institutions, church, schools, etc; and then the market, which drives commerce, capitalism When the three are out of balance, the society is dysfunctional.

“That’s the case of Jamaica, and, in doing that, our politicians have shifted the focus from people to things, to scoring points on whether Jamaica is developed because it has a new House of Parliament, and I have learnt that Parliament can be conducted under a tree,” he said, a clear swipe at the Holness administration on the push for a new parliamentary building, even though he did not object to the need for one.

It was a case of priority for the attorney-at-law and businessman, civil society leader, advocate and family man.

“Inequality is what destroys a society. No society in history lasts long when there is inequality, not only of material things, but inequality of opportunity, race, class, creed, belief. We have to understand that, if we do not care for those of us who are less than us, we will be destroyed,” he warned.

According to him, the late National Hero Norman Manley realised that there was need to build a middle class in the 1960s after the ravages of British colonialism, but his son, the late former Prime Minister Michael Manley, took Jamaica down the wrong road too fast.

“No one can challenge that. It is something that Edward Seaga spoke about – the haves and the have-nots,” said Mitchell of another former prime minister.

While the younger Manley is credited for overturning a significant amount of social, economic and educational hurdles, including women enlisting in the Jamaica Defence Force in the 1970s, his radical policies drew the fear of death in the haves, who saw the have-nots coming too close for comfort. It resulted in a massive flight of capital.

“We need to understand that we stand on the shoulders of those below us, and if the weight becomes too heavy, we are all going to fall down ... ,” he said.

Howard Mitchell is brave. He has been hit by many challenges and has beaten them. But, like the motto of one of the nation’s high schools says, the brave may fall but never yield. Mitchell will always be in love. A little sadder, a little angrier. But still in love.