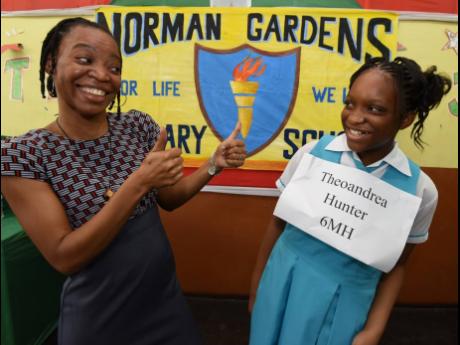 Ian Allen
Theoandrea Hunter, winner of the Norman Gardens Primary School’s Spelling Bee Competition 2022, gets the thumbs up from her teacher, ladene Mignott-Holt, shortly after she emerged victorious from a field of 10 on Thursday. 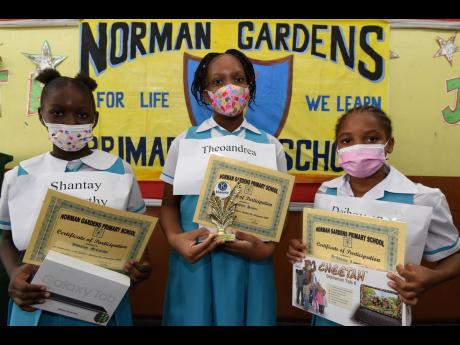 Administrators at the Norman Gardens Primary School in Kingston held a spelling bee competition on Thursday to help restore some school spirit, while also challenging the intellect of their students, who had been out of the classroom for almost two years since the onset of the COVID-19 pandemic.

Ten students from grades four to six who have been in preparations with their subject teacher since October last year, participated in the competition.

Velma Russell, acting principal of the school, said the competition signalled a renewal of commitment to the students and academic staff as the school aims to put their name on the map in the academic sphere.

“This spelling bee competition shows the resilience of our students, our teachers and our parents, in spite of COVID-19,” she added.

Theoandrea Hunter of class 6MH came out victorious, surpassing the other nine students who competed.

After almost an hour of the students competing for top prize, in the end it boiled down to the top three students to determine who would win.

The neck-and-neck battle saw Shantay McCarthy of 4C, who initially spelled all of her words correctly, misspelling the word ‘D-E-L-E-G-A-T-E’ towards the end.

Hunter capitalised on the opportunity, spelling correctly Shantay’s word and her own challenge, ‘D-E-L-E-T-E’, to seize victory.

Hunter ended the competition with having only spelt two words incorrectly.

The elated Hunter told The Gleaner that although she stumbled on a few unfamiliar words, she pushed through to come out on top. The sixth-grader was thrilled to have the support of her brother, Akeem Morgan, and sister-in-law Alicia McKenzie-Morgan, who were both cheering her on.

Morgan said the win was a great achievement for his baby sister and he is grateful for the opportunity to witness the milestone.

He commended his wife, Alicia, who he said spent most of her time helping his sister in her studies.

“I am so excited. She told me that she would’ve won and I believed her 110 per cent, so I am very happy and I am glad that we are here for her,” said McKenzie-Morgan

Hunter, who wants to transition to Campion College after sitting her Primary Exit Profile examinations, is expected to excel in the future.

“Anything that she puts her mind to, she will achieve it,” said McKenzie-Morgan.

“I am very ecstatic,” remarked Ladeen Mignott-Holt, teacher of the winning class and first-place student. She explained that it was not a challenge to getting Hunter and other students prepared within the two-month period.

“She did most of the work herself ... she wanted to win and she put in the work. I was just there to encourage,” she said of Hunter, who has been described as a hard worker.

All spellers received a certificate of participation, while the second and third-place winners also earned a tablet.

Hunter took home a trophy as well as a gift basket.