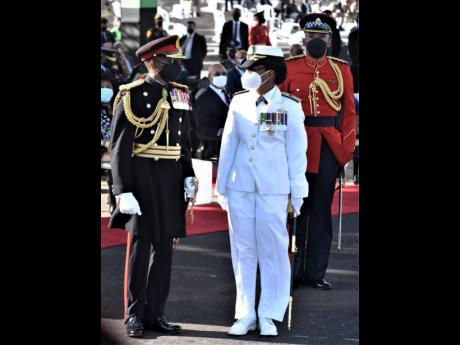 The Strategic Defence Review charts the JDF’s course up to 2037.

“As we deal with issues of safety and security as a nation, I am confident that the JDF is prepared to confront the challenges to our peace and security,” Wemyss Gorman stated.

She was addressing members of the audience during the Change of Command Parade, held at Up Park Camp in Kingston, on January 21.

She succeeded Lieutenant General Rocky Meade, who retired from the JDF after a glittering career spanning 38 years, the last five as CDS.

Wemyss Gorman noted that the JDF “must maintain its steadfast support and commitment to citizens and work diligently to defeat the threats to safety and collective existence”.

Meanwhile, Meade stated that the Jamaican people can “continue to trust in the JDF and its leadership”.

“I would like to thank the people of Jamaica for your support and confidence, and notwithstanding the immediacy of several challenges you face, that you welcome the long-term approach for a sustainable solution to resolve the culture of violence in Jamaica,” he said.

“In the medium term, we continue to build-out the defence security and justice systems. Of course, in the short term, you are faced with immediate challenges, and we will continue to support the Jamaica Constabulary Force in the effort of keeping the internal security situation to a manageable level,” he added.

The parade represented the 12th transfer of command in the almost 60-year history of the JDF.