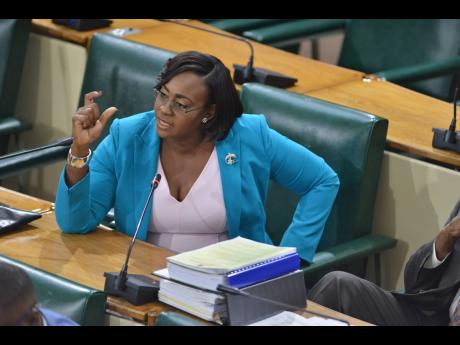 Juliet Holness, member of parliament for St Andrew East Rural, wants the Public Administration and Appropriations Committee (PAAC) to recommend to Parliament that the Government embarks on a programme of electronically updating its latest policies on a range of issues across the public sector.

The proposal comes against the background of reported dissonance in policies and guidelines between some public bodies and the instructions set out by the Ministry of Finance and the Public Service.

At a meeting of the PAAC last week, Holness said that the latest policies and guidelines of the Government in relation to emoluments or any other matter should be clearly established and made available electronically so that all departments and agencies can have access to them.

Audrey Sewell, senior technocrat and permanent secretary in the Ministry of Economic Growth and Job Creation, as well as the Office of the Prime Minister, told PAAC members that one of the challenges faced by successive administrations was the fact that some public bodies did not follow Ministry of Finance guidelines.

“For example, we know in Government that any policy at all that you may develop in your agency as regards compensation, investment and so on should be approved by the Ministry of Finance,” Sewell said.

PAAC Chairman Mikael Phillips said that the committee had seen too many instances where policy was established by the Government and public bodies or agencies refused to follow them.

“There is a bigger issue that will come out of our report and that is how the Ministry of Finance monitors these policies that are established by it to ensure that they are carried out,” he added.

Sewell put it down to a “misunderstanding” at times on the part of public boards, who believe that the statutes governing their agencies vest in them certain powers to make decisions. She noted that even when permanent secretaries intervene and say things cannot be done in a particular manner, there are some who insist that the legislation gives them the power to act.

“We have been working with the agencies to ensure that they are in line with government policies; some we have addressed, and as we go along and these matters come to the fore, we try as best as possible to address them,” Sewell added.

Dalling has argued that before such a conclusion was reached, the auditor general should have received the benefit of legal opinion from the Attorney General’s Chambers.

But Dalling contended that an amendment to the Firearm Licensing Act in 2016 gave the board latitude to negotiate a contract with its CEO.

Dalling is relying on this specific clause in the legislation: “For the due administration of the authority, the board may, with the prior written approval of the minister, appoint a chief executive officer of the authority, at such remuneration and on such terms and conditions as the board thinks fit.”