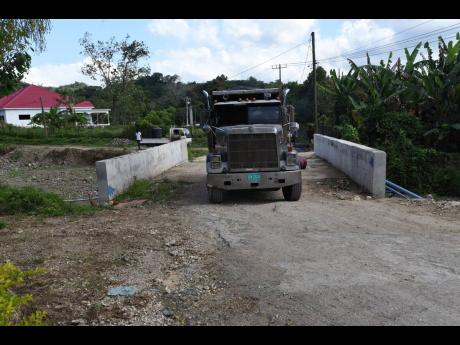 Residents in St Catherine West Central are overjoyed about the installation of a new bridge, which has replaced the antiquated, unsafe one that served as Watermount and other neighbourhoods’ only connection to other community corridors and the main thoroughfare.

This has resulted in the local primary school experiencing an uptick in its attendance, as parents have become less apprehensive to send their children to the institution.

In previous times, children have had to cross the perilous bridge, which lacked railings or a pedestrian walkway.

Principal of the Watermount Primary School, Karlene Thomas-Laing, told The Gleaner on Friday that the school had only 183 children before the construction of the new bridge.

This, she explained, was a direct result of parents’ increased anxieties for their children.

When heavy rains came, youngsters had to duck beneath the bridge to avoid being hit by passing vehicles.

Many people avoided crossing the bridge because of reports like these, as well as the bridge’s inability to have two cars pass at the same time, due to its narrow structure, numerous potholes, and being prone to flooding.

“I remember quite a few mornings when students are coming (to school) and even if they are late and they see a vehicle coming, they would jump under the bridge. If a vehicle was coming, not even a pedestrian could walk on it,” she said.

In other cases, despite the school being close to some homes and parents believing in the school’s vision and mission, access issues prevented most parents from enrolling their children, forcing them to seek out alternative schools, even if the distance was farther.

Since 2022, the institution has seen an increase in enrolment, with a current sitting of 220 students, up from the previous 130 in attendance. It is expected that more students will continue to be enrolled as the time progresses.

The bridge was reported to be more than 70 per cent complete. It has been upgraded to allow two vehicles travelling in opposite directions to pass simultaneously. Currently, patchwork is being done on both sides of the road leading up to the bridge’s entry.

One resident expressed to The Gleaner her gratitude for the project that has aided the primary school. She explained that if it wasn’t fixed, Watermount Primary School would have to close on occasions as there was nowhere for children to travel to school on rainy days.

“Unless one of the tractors stay over this side and carry we over ... when the water gets very rough and high,” she explained.

Leroy Woodhouse, a local who owns a vehicle and has raised his children in the neighbourhood, expressed his delight at the new development.

“It was a very small bridge [before] and when the rain fell, we couldn’t cross it lots of time because the water would cover the bridge,” he said of the challenging situation.

But Woodhouse is extremely appreciative of the change that will lessen the strain on his car tyres when travelling over the bridge to and from his community, he stated.