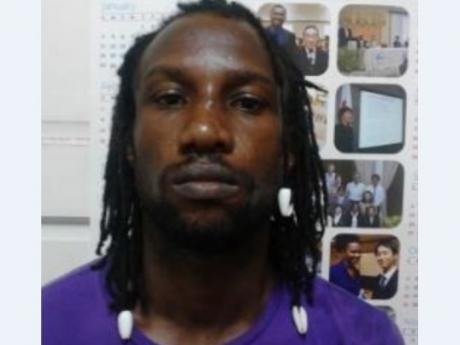 The 43-year-old labourer, who is from Plymoth Hill in Portland, was held in St Ann on Monday and subsequently handed over to cops in Portland. -Contributed photo.

Marlon Bryce, who had been on the run since September 2015 after being named a person of interest by the Portland police, has been taken into custody.

The 43-year-old labourer, who is from Plymoth Hill in the parish, was held in St Ann on Monday and subsequently handed over to cops in Portland.

Bryce was being sought by the police in relation to a series of burglaries.

Police sources said that Bryce was a suspect in a case of burglary and larceny and was being sought for questioning in connection with the offence, which was committed in September 2015.

According to Superintendent in charge of the Portland Police Division, Kenneth Chin, Bryce's arrest came after a series of robust police operations in Portland which led to him fleeing from Plymoth Hill to Sommers Town Road and to Love Lane in the parish, then to St Catherine and finally to St Ann, where he was captured.

"We will continue our work as law enforcement officers to ensure that Portland remains the safest parish in Jamaica. We appreciate the continued partnership of you the citizens," Chin said.

Bryce's arrest also came against the background of that of the parish's most wanted, Elroy Griffiths, who was on the run for the better part of two years and was being sought for the murder of his common-law wife in Buff Bay in 2019.

Griffiths was arrested on January 18 in the farming community of Hope Bay, where he was found in the company of a female.