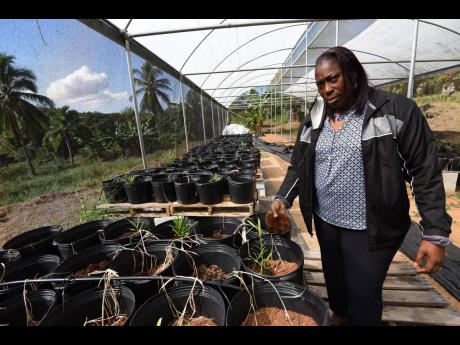 The Tacius Golding High School in St Catherine is aiming to boost the efficiency of farmers in the surrounding Brown’s Hall community in ginger production, with a greenhouse that it has built to produce the potent root crop on a commercial scale.

The project was made possible through the efforts of St Catherine Western Member of Parliament Dr Christopher Tufton, with assistance from the Rural Agricultural Development Authority (RADA). About $2.5 million has been spent to get the project up and running for the long-term benefit of the community. Funding was sourced through the Constituency Development Fund (CDF).

With the institution already having a positive impact on the surrounding farming communities, Suzette Johnson, one of four agricultural science teachers at the institution, who teaches grades 10-12, informed The Gleaner last Friday that the 1,000 ginger seedlings that will be separated into two batches, will help to sustain the project, as once the first batch of 500 reaches four weeks old, they will be taken out and replaced with the second batch so as to ensure consistency in production and supply of the produce.

The project will initially supply seedlings to farmers, but will subsequently offer them for sale to others as the project progresses.

The ginger rhizomes were cultivated through the tissue-culture method before being delivered to the school by a RADA parish representative. They were planted in containers using coir, the outer fibre of coconut husk, instead of soil.

Pleased with the establishment of the project which began some six months ago, Johnson explained that the programme will help to boost the interest of youngsters at the institution. With a population of about 1,400 students, Johnson said up to 45 students would normally sit the Caribbean Advanced Proficiency Examination agricultural science examinations.

According to Johnson, the school typically has a 100 per cent pass rate in the Caribbean Secondary Education Certificate examinations, which demonstrates that pupils have a strong interest in the agricultural sector.

“Because this is a farming community, we try to maintain the agriculture part of it and we allow the students to recognise that farming is a business, [that] even if they have a limited amount of space, they can do something for themselves to feed themselves,” she said.

The school also grows breadfruit, banana, yam, cassava and plantains, along with fruit trees like ackee and papaya.

In addition, the school is heavily invested in finding ways to produce enough to supply its canteen. The institution has been able to supply the canteen with meat from a slaughterhouse sponsored by the education ministry, as well as a pig pen, poultry operations, and, most recently, apiary. The excess is sold to the community. They are currently working on building a rabbit house to add to their revenue-generating endeavours.

The school also has an agro-processing plant, where it processes bammies, breadfruit, and cassava flour, which is sold to members of the community.”They have invested a lot in the plant and want to turn it into a level-one food-processing facility,” the agricultural science teacher said.

Due to the community being engaged mainly in subsistence farming, Omar Francis, special assistant to Tufton, pointed out that the current food production is just enough for most farmers to trade with a neighbour or to care for their families.

“So, the push is to introduce a particular, and necessary product on a larger scale in the constituency,” he explained, noting that the community currently produces a variety of produce but none on a large scale.