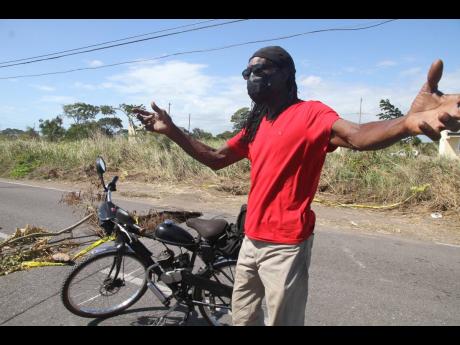 Nathaniel Stewart
Delroy Chambers of Mitchell Town, Clarendon, shares the inconvience caused by the collapsed drain along the Lionel Town main road in the vicinity of Monymusk Glades. 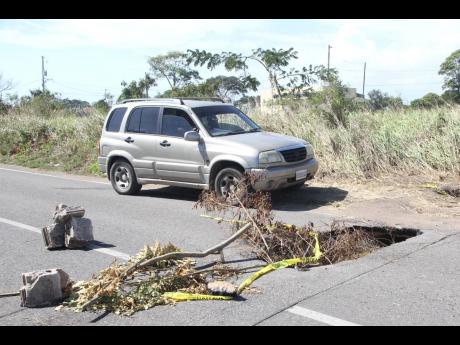 Nathaniel Stewart
Some motorist travelling along the Lionel Town main road ignore the detour sign and cross the drain which collapsed over a week ago. 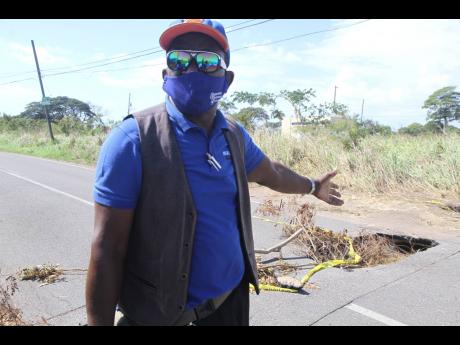 Nathaniel Stewart
Frederick Bryan, president of the Vere Taxi Association, Clarendon, points to a crater caused by a collapsed drain along the Lionel Town main road in the vicinity of Monymusk Glades.
1
2
3

Taxi operators who ply the Lionel Town route in Clarendon South Eastern are lamenting the delayed response to a collapsed drain along a section of the main road in the community. Motorists describe the collapse as a disaster waiting to happen and have chided political representatives for their negligence in having the problem rectified.

But member of parliament for the constituency, Pearnel Charles Jr, told The Gleaner that he has made contact with the National Works Agency (NWA) and is disappointed that the work is yet to commence.

Responding to criticisms of a lengthy wait to remedy the woes, Stephen Shaw, NWA’s manager of communication and customer services, contended that the entity is simply following through with regulated protocols.

“When persons are saying it is taking long, I don’t know what that means. There’s a process that we have to follow through on to ensure that we are in strict adherence to the policy and legal guidelines that have been established by Government,” he said. Shaw told The Gleaner that the collapsed section of the road stemmed from fire being set to a culvert beneath the road’s surface.

Members of the Vere Taxi Association, who have been detouring through the newly built Monymusk Glades housing scheme, said residents are becoming annoyed with the traffic change, adding that motorists have been blocked from accessing one section of the area.

Frederick Bryan, president of the association, who spoke with The Gleaner on Saturday, said, “The scheme people will not tolerate it because of the number of motorists – taxi plus local operators have to traverse, and across the road there are persons living on additional section of the Monymusk Glades. They are the ones obstructing the motorists from going through the scheme because of the dust nuisance that the motoring public creates on them.”

Bryan, who described the infrastructure as faulty and “shoddy work”, said more effort needs to be invested in road construction to ensure a permanent fix. “From what we see here, a cyclist or pedestrian should not traverse this area, because there’s no structure underneath the road surface to withstand the weight and frequency of motor vehicles, so there needs to be serious and immediate attention to this to ensure the safety of the traversing public and everyone,” he added.

Bryan also raised concern for the safety of motorists who are not cognisant of the road condition.

Curtis Lambert, a resident of Mitchell Town, has cried negligence. “This should a fix long time. The people dem nuh move swift enough when anything happen in a Clarendon. We are treated the worse in a Clarendon,” he bemoaned.

Lambert argued that his business has been dealt a raw deal, as people have stopped venturing into the Rocky Point fishing village to make purchases from fisherfolk.

Charles told The Gleaner that he made a report to the NWA since January 12.

“I am disappointed in the time it has taken the National Works Agency to respond, but I have continued to communicate with them and urge them and I was advised that it has been categorised as emergency work, the contractors were retained, and the work will start with urgency,” Charles Jr said.

He added: “I met with and spoke to the representatives that are responsible for southeast Clarendon, and informed them of the urgency of the matter, and considering it is a main road that is traversed regularly, and also considering the danger. I asked them to put in place an immediate strategy to stop people from using that road.”

Conceding that the traffic detour through Monymusk Glades poses an inconvenience, the MP is urging residents to be patient.

Residents have also raised an alarm over the Alley Bridge that has crumbled numerous times during heavy or continuous rainfall. Charles Jr said he has also been in dialogue with the NWA on the matter, and has suggested a permanent redress to the issue. “On my part, I have done everything that I can do, and continue to advocate for a more permanent fix in that area,” he told The Gleaner.

Responding to comments that he has neglected his political duties to the constituency, the MP said, “I reject any comment of that nature to be completely false, because I continue to do everything to advocate for the road network to upgrade. As a matter of fact, throughout this pandemic, a lot of work has been done,” he hit back, citing roadwork done in areas including Palmer’s Cross, Dampie, Gungo Lane and Rocky Settlement.

In the meantime, the Vere Taxi Association said withdrawing services amid the road breakaway remains an option.