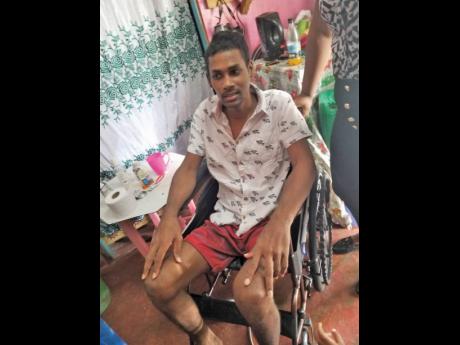 Gareth Davis
Miller sits in the new wheelchair donated to him.

Jermaine Miller, a 31-year-old Portland man who was electrocuted while clearing vegetation from power lines – leaving him paralysed from the waist down – is receiving much-needed help.

Miller, who fell from a tree after being struck by high voltage from a Jamaica Public Service (JPS) power line last year, was provided with a brand new wheelchair by businesswoman Shanique Green on Sunday at his home in Tom’s Hope in the Rio Grande Valley of east Portland.

Mother of the physically challenged man, Esmie Rampassard, was overjoyed and extended thanks to the businesswoman for her kindness and compassion. She also expressed gratitude for donations of food and money for her family, which she said had fallen on hard times following her son’s accident.

“I prayed morning and evening for help and God answered my prayers,” said Rampassard.

“My son cannot do anything for himself. Him just lie in bed wid him eyes dem open. And since suffering damage to him (his) brain (head), him a talk pure foolishness. I am thankful for the wheelchair and we can now move him about now. I am happy for the supply of food, as there was no food in di house. Di money will also help us a lot too,” said Rampassard.

Miller, who was contracted by a friend to remove parasitic plants and other forms of vegetation from JPS power lines, reportedly came in contact with one of the high-tension wires and was struck. He reportedly fell and hit his head on the ground and lost consciousness. He was rushed to the Port Antonio Hospital following the incident in September 2021, but was later transferred to the Kingston Public Hospital.

At the time of the incident, Miller’s friend reportedly had an existing contract with JPS to remove overhanging trees and other forms of vegetation from power lines.

Meantime, Green, who said that she only learned of the challenges facing the family less than two days ago, told The Gleaner that she is more than happy to help, especially given the circumstance which led to Miller suffering such serious injuries, and also that he was the breadwinner of a family that is now facing serious economic hardships.

“There are children living in that household that were very hungry and it was rather frustrating for the mother,” said Green.

“I am hoping that other persons will come on board to assist this family with basic food items, as there is definitely a need to help. Additionally, I was told that the young man has to go to Montego Bay (St James) to see a specialist three times per week, but the family cannot afford that. He suffered serious brain damage and really needs help. I am appealing to the people of Jamaica to see how best they can help this family,” she added.