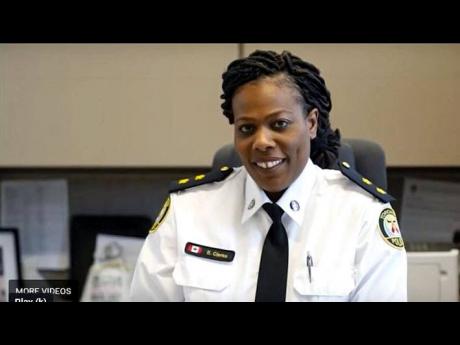 A Jamaican who is a senior police officer attached to the Toronto Police Service (TPS), Superintendent Stacy Clarke, is facing seven charges under the Police Services Act, including breach of confidence, discreditable conduct and insubordination.

In January 2021, the 24-year veteran became the first black woman to achieve the rank of superintendent in the TPS, the largest municipal police service in Canada.

The notice of hearing outlining the details of the allegations against the superintendent was released on January 24, after Clarke made her first appearance before a virtual disciplinary tribunal.

The notice alleges that, in the fall of 2021, Clarke acted as mentor to police candidates seeking a promotion from constable to sergeant. It notes that she was a member of the promotional interview panel and that, on November 10, she received an email directing her to cease all contact with applicants she was mentoring on or before November 25, 2021.

It is alleged that, on later dates in the same month, Clarke sent photos of interview questions to six constables she was mentoring and, in doing so, she “committed misconduct in that you did divulge any matter which it is your duty to keep secret”.

Clarke is also alleged to have committed misconduct when she met with one of her mentees at her home on three consecutive days in early December to provide one-on-one mentoring.

The allegation states that Clarke acted as a member of the constable’s interview panel, but “failed to make known the nature of your relationship you have with him and the conflict of interest associated with your participation in his interview panel”.

“In so doing, you have committed misconduct in that you did act in a disorderly manner or in a manner prejudicial to discipline or likely to bring discredit upon the reputation of the Toronto Police Service,” states the notice of hearing.

It is also alleged that in a mock interview with the constable, the superintendent posed questions from previous interview panels on which she sat and real interview questions that were a part of the promotional interview package.

“While the Police Services Act prevents me from commenting further, I can also say that it is the chief’s intention to bring in an external prosecutor and adjudicator for this matter,” said Meaghan Gray, manager of corporate communications of the TPS, in an email response to The Gleaner.

Clarke, who is currently suspended with pay, is represented by lawyer Joseph Markson. Under provincial law, suspended police officers must remain on the payroll unless sentenced to jail time.

At Monday’s hearing, the prosecution asked for additional time to seek an external prosecutor in the matter. The next disciplinary tribunal will be held on February 23.