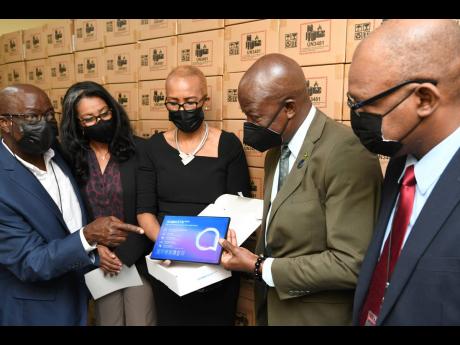 The Post and Telecommunications Department has signalled its intention to reposition the 350-year old institution as a “logistics giant”, even as a burgeoning courier service industry, spurred by pandemic conditions, is now transforming the logistics landscape.

“We are already a logistics giant,” said Postmaster General and CEO of the Postal Corporation of Jamaica, Lincoln Allen, on Tuesday, as the entity was in the middle of securing 11,500 tablets to be distributed to students and teachers islandwide, as part of the Government’s Tablets in Schools initiative.

The post office has been the main logistics and distribution partner of E-Learning Jamaica Company Limited during the pandemic, boasting a logistics feat of safely delivering a total of 75,000 tablets to date.

“In terms of postal locations or locations in general, we have the most points to deliver packages, to deliver parcels, and to deliver letters. So, we are on a thrust to transform the entity. And so far, so good,” Allen told The Gleaner at the official handover of the devices on Tuesday at the Central Sorting Office (CSO) headquarters in Kingston.

The Post and Telecoms boss indicated that the entity was undergoing an organisational review and has already identified certain capacity deficits which it is now in the process of addressing with the help of other government agencies.

Digital connectivity and transportation are other areas that have been strengthened in response to growing competition in a pandemic-fuelled innovation wave.

“Going forward, there will be a thrust to enhance our capabilities, our capacity, and our service delivery.

“There are some technical competencies that have been absent from the organisation over time and we have identified them. We have engaged with the Ministry and Finance and Public Service that has been providing us with some form of support in getting the requisite personnel, and having positions established for us to recruit the requisite personnel within the organisation, to strengthen its ability to deliver to the public,” said Allen.

Prime Minister Andrew Holness, who recently toured the CSO location, indicated that the entity will also serve as the vault and ID card distribution hub for the National Identification System (NIDS) to be rolled out later this year.

Deputy Postmaster General of Business and Regional Operations, Sophia Hamilton-Brown, indicated that the NIDS partnership, and other such government linkages to be announced, will bolster the entity’s rebranding efforts, driving traffic to its new and improved commercial products.

“Our three premium services are our ZipMail that is our next-day local express service. This is the service we use to deliver tablets and computers to our students and teachers islandwide.

“Another of our premium service is our online shopping facility, Klick and Ship, and we have Fast Track and Express Mail Service as well.

“We have strengthened our transportation network, our staffing and how we arrange ourselves, even how we store these devices in our warehouse. So, trust and speed is what we are working with right now and we are doing very well,” said Hamilton-Brown.

The senior executive further noted that while revenue in letter mail had plummeted during the pandemic, and had been on a downward spiral before then, revenues have picked up for movement of goods.

“In terms of letter mail, which is not unusual, because we have seen a decline over the years and we would have seen it more now. But what we have seen though in terms of revenue is that it’s not low because moving goods and services from point A to point B has been on a steady increase.

“In fact, we have seen an increase in the uptake of ZipMail, so more persons are using ZipMail locally to move their products and internationally as well. So we are not really seeing that, but letter mail is going down and that is why we are repositioning ourselves now to move goods and services.”