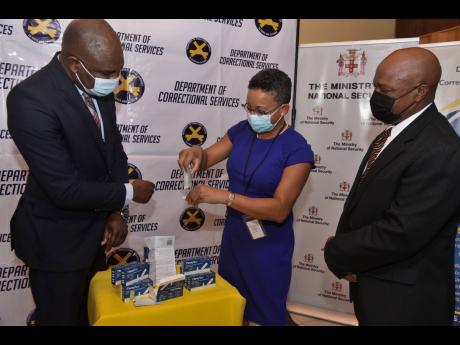 Ian Allen/Photographer
Dr Donna-Michelle Royer-Powe (centre), director of medical services at the Department of Correctional Services, explains the workings of COVID-19 test kits to Zavia Mayne (left), minister of state in the Ministry of National Security, and Retired Lieutenant Colonel Gary Rowe, commissioner of corrections. Occasion was a handover ceremony of 500 COVID-19 test kits to the Tower Street Adult Correctional Centre in Kingston on Thursday.

As the Department of Correctional Services (DCS) seeks to clear up 95 active cases of COVID-19 among the inmate population, vaccination take-up remains low.

There are fresh concerns about repeat infections among the penal population, as well as instances of long COVID afflicting some staff and inmates.

The DCS has another 26 COVID-19 cases among its staff.

The explosion of infections has been fuelled by the Omicron variant, which is far more transmissible than the Delta strain but has caused far fewer cases of severe disease and death.

“In this surge, we haven’t had anybody even hospitalised, so I’m giving God thanks for that. The numbers have been worse than the first, second, and third surges in terms of the number of people affected,” she said.

“However, they have been all mild. The third wave was our roughest in terms of the loss of lives and how sick the persons were.”

Royer-Powe described the vaccination rate, which is around 10 per cent, as disappointing.

Immunisation drives, in partnership with the health department, have been hosted every two to three weeks, said Royer-Powe, with another campaign scheduled for Saturday at the St Catherine Adult Correctional Centre and Tamarind Farm.

About 30-40 inmates at Tower Street and the Horizon Adult Remand Centre took the jab last week.

The director said that the biggest uptake was last August, when 200 inmates got vaccinated. Since then, inoculation has been at a trickle.

Royer-Powe disclosed that a few inmates and staff are suspected to be suffering from long COVID-19, and they have been referred to hospital for follow-ups and investigations.

“Up to yesterday, we had a member of staff who got COVID-19 and was having cardiac symptoms, which would suggest that she has developed some long COVID-19. We’ve also had inmates who have gotten the virus all the time – every wave they have caught it, so that’s why vaccination is important,” she said.

Five hundred self-test kits were handed over to the DCS on Thursday to aid in its COVID-19 response.

Royer-Powe said they will be used by staff as a means of surveillance – random tests and preliminary testing for anyone who presents with COVID-19 symptoms.

The DCS will continue to utilise PCR tests for inmates.

The penal system has a population of approximately 4,000 inmates. Of that number, about 260 have been diagnosed with mental disorders.

The prisons have no full-time psychiatrists, but 11 posts were added to the establishment in December 2020. Recruitment is ongoing.

“We held interviews and one candidate was successful, so at least we should be getting one full-time psychiatrist within this quarter; and we have plans to do interviews with five candidates in early February,” Royer-Powe said.