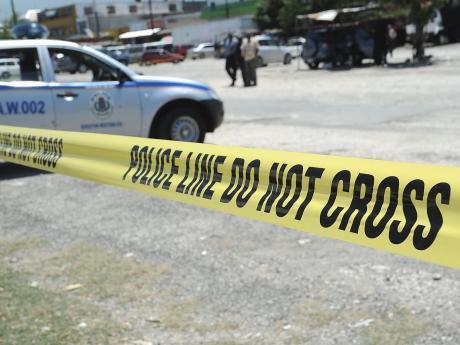 Thursday’s fatal shooting is the second murder committed in the St Mary police division since the start of 2022. -File photo.

The police in St Mary have launched a manhunt for a suspect who allegedly shot and killed a man during a dispute over a parking spot.

The deceased has been identified as 25-year-old Adrian Lawrence of School Hill, Castleton in the parish.

A preliminary report has indicated that Lawrence, a chef, had an argument with another man known only by his alias 'Rick' over a parking space.

Police sources said that the man issued a threat to Lawrence that he was going for his gun and that he would shoot him in the head.

According to the police, shortly after, the man returned and was seen exiting from a black BMW motor car.

He allegedly pulled a handgun and opened fire in the direction of Lawrence, who was hit.

He was pronounced dead on the spot by a doctor.

Following the shooting, the man reportedly got back into the BMW and fled the scene.

Thursday's shooting death of Lawrence is the second murder committed in the St Mary police division since the start of 2022.

Meanwhile, almost two hours after that incident, the police were summoned to a shooting in Annotto Bay where Davian Bailey was shot and injured at Fort George Road following a verbal altercation between him and a group of bikers.

According to the police, Bailey was driving his car home when a group of men driving motorcycles rode up on him and an argument developed.

Shots were fired and Bailey was hit, after which the men sped off aboard their bikes.

Bailey was taken to the Annotto Bay Hospital where he was treated and released.

His injuries are not considered to be life-threatening.