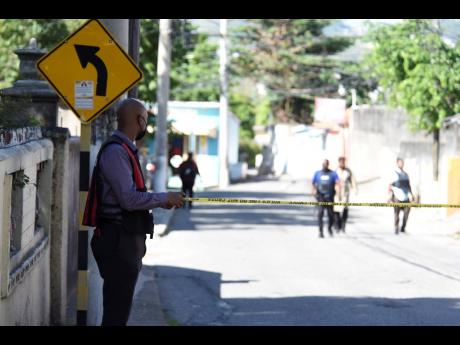 Nicholas Nunes/Photographer
Police cordon off a section of Whitehall Avenue in St Andrew, after a fatal shooting on January 20. 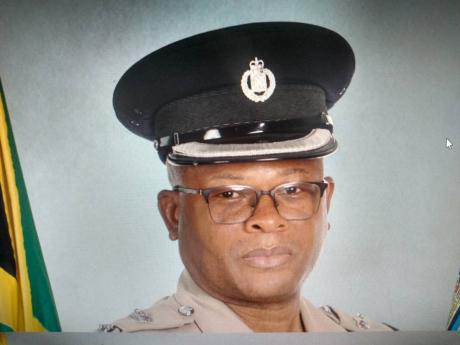 The criminal underworld hidden beneath the busy St Andrew North Police Division is a maze of wealth, bloodshed, and extortion – a melting pot of business owners, organised criminals, and their hybrids.

Beneath the eye, investigators say a man locked away in a United States prison currently calls the shots on one of the division’s deadliest ‘ends’ in recent years; while two others, living in Canada, are reportedly pumping large sums and guns to gangsters on other feuding corners.

On a dozen other ‘ends’ along Red Hills Road, criminals make a meal of business owners through what Deputy Commissioner Fitz Bailey last week alluded to as an economic ideology among criminals islandwide – a heightened, more involved form of extortion akin to terrorism.

Then, there are the networks involved in murder-for-hire, with members operating in the comforts and confines of the division’s posh apartments, and feeding information to killers on the ground.

Local law enforcement across divisions – alongside international and regional partners such as the US Bureau of Alcohol Tobacco and Firearms (ATF) and the Implementation Agency for Crime and Security of the Caribbean Community (IMPACS) – have been tracking such individuals locally and overseas, their aim to build airtight cases that facilitate speedy deportation and prosecution locally.

But building such international cases takes time and effort, and while investigators toil, cops on the ground in St Andrew North, for example, grapple with their deadly seeds as they try to tame local shot-callers, complicit businessmen, and hitmen killing for money in the space.

It is only for residents to come forward with what they know and stand firm behind statements in court. But in these parts, witnesses often turn up dead or missing in interconnected gang rivalries that see long-time friends kill each other.

Year-to-date murder figures in the division have not risen in comparison to last year, though there has been a 100 per cent increase in the number of shootings, and at least five persons injured so far this year.

“We have only had three murders so far, knock on wood. And I can tell you, this is not by luck,” professed Superintendent Aaron Fletcher, head of the division which houses warring factions spanning the length of Red Hills Road into Airy Castle in Stony Hill, St Andrew. “Our officers have really been putting in the work on the ground.”

Some historical conflicts like those between 100 Lane and Park Lane and their allies have morphed and their tentacles are many. The 100 Sunrise Gang, those in the heated Plum Lane/Collins Close, Ackee Walk, the alliances formed and spillovers in Grants Pen, and those that find resources as far as Ambrook Lane outside the division are on investigators’ watch list.

At least two of the 88 men recently listed as majorly wanted by the police – Jermaine Smith, aliases Kartel or Gazaman and Worm of Golden Spring Road; and Kemar Graham, who frequents Boone Hall, Arthur Leon Drive in Golden Spring – were named from St Andrew North. Both were wanted for murder, but Bailey emphasised that the list was not exhaustive.

“St Andrew North is a dynamic division; so you have the extremes: the crime-prone zones and unplanned communities and then a stone’s throw away you have middle class, and a bit further you have the upper echelons of society – the rich, the influential,” explained Fletcher, adding that while shootings and homicides are mostly concentrated in the southern-belt communities, the profile of criminals and the crimes changes with an ascent into areas better off.

House break-ins, larceny, and other acquisitory crimes are among those featured in upscale communities like Norbrook, where sleuths have been probing “southern belt” gangsters, and some from even outside the division and overseas, who are buying properties in the area.

Among the garrisons, however, is the Plum Lane and Collins Close rivalry, which has so far claimed the lives of two men this year, while a third murder was recorded in Cassava Piece – all stemming from conflict over illegal guns, said the superintendent. These rivalries have spilled over into neighbouring communities such as Grants Pen and 100 and Park lanes, historical danger zones, and in areas even outside the division.

“They are deemed the undesirables, based on the influence they bring to the (upscale) communities,” he added. “Some persons will leave it alone because of the fear of loss of life, but unfortunately so. We would rather they find some means of sharing the information.”

Information-sharing, he said, is critical to building cases against the gangsters, and also critical in aiding regional and international law enforcement’s efforts to track them and the weapons they bring into the island across borders.

Police seized 39 illegal weapons, mostly pistols and two rifles in the division, last year. So far this year, they have seized only one. Except for guns stolen from security guards and other licensed firearm holders, most had registration intact, and most originated from the US.

Such improved partnerships would greatly aid efforts to clamp down on arms smugglers, the majority of their guns originating in the United States. It would also greater highlight air and sea vessels implicated in the illicit trade, better enabling identification and scrutiny from border patrol.

In its reports, the ATF lists the tampering of serial numbers on illegal weapons found in Jamaica among the difficulties for tracing them. It is unclear whether those found buried in Stadium East, for example, had visible registration, details DCP Bailey kept close to his chest last week.

Bailey also would not divulge how many vessels and shipping companies the police have red-flagged for the smuggling of illegal weapons into the island, nor how many weapons were sent to ATF for tracing last year. “We can’t go into these issues, I wish not to comment on that,” responded Bailey to questions posed by this newspaper.

In the meantime, days after excavating a cache of 10 guns in and around the Stadium East premises, its operators Independence Park Limited announced Friday that the premises had reopened for regular activities. Eight of the weapons were found on the Stadium East grounds and another two on its perimeter. One man, owner of the building material under which the two guns were found outside the premises, was arrested.

On Thursday, Major Desmon Brown, general manager of Independence Park Limited, played down suggestions of the company or its employees’ involvement in the major weapon haul. He said, however, that he awaits such deliberations from the police.

“This is a 50-odd-acre property. You cannot secure the whole property. Yes, we are going to have to improve it in some ways, and that’s why we are waiting on the recommendations from the police to see what we can do,” he noted.

“ ... When do you think those guns were hidden? Do you think it was in broad daylight? I don’t think so ... . And what I am saying is that we will have to review our security. I cannot mention what we are going to do until we hear from the police. It is just difficult to secure 50-odd acres,” he said.

“Stadium East only comes in as a warm-up area when we have international track meets, so I don’t think this is going to affect it (activities at the complex) any way,” Brown responded to questions of the implications of the guns found on the future of business and the hosting of international events.