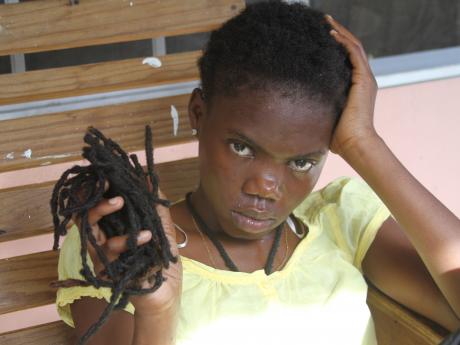 Nzinga King, 19, alleges that her dreadlocks were cut by a policewoman while she was in custody at the Four Paths Police Station last year.

The Office of the Director of Public Prosecution says it has now received a critical forensic report in the case of Nzinga King, the Clarendon Rastafarian teen whose locks were trimmed in a police lock-up.

In a letter copied to The Gleaner, Director of Public Prosecutions Paula Llewellyn said she received the report this week.

She had been waiting for the report for the past three weeks.

“All being well I and my team will now be able to complete the ruling which will be sent back to INDECOM later this week,” said Llewellyn, referring to the Independent Commission of Investigations which is leading the probe.

Llewellyn has sought to assure that the report will be made public.

King, 19, alleges that her dreadlocks were cut by a policewoman while she was in custody at the Four Paths Police Station last year.

Her attorney, Isat Buchanan, told The Gleaner that he is disappointed by the delay in his client's case.

She had been arrested for disorderly conduct which stemmed from a June 2021 incident at a taxi park in May Pen, Clarendon.

She was also charged with a breach of the Disaster Risk Management Act.

Last week, King appeared in the Clarendon Parish Court to answer the charge of failure to wear a mask in public.

A trial date has been for June 15.