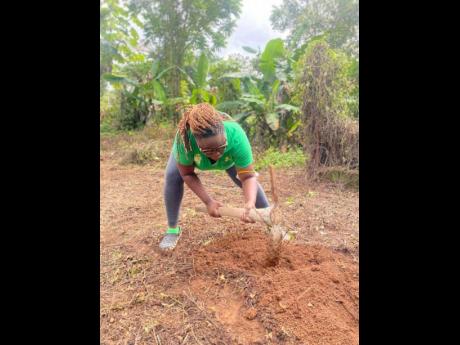 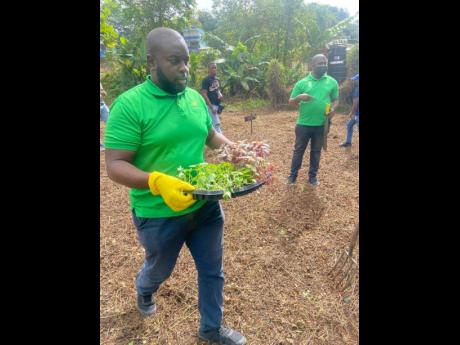 Members of Generation 2000 (G2K), the young affiliates group of the Jamaica Labour Party, donated a variety of fruit and vegetable seedlings to the Rock Hall Primary School on Saturday, bringing awareness to students of the importance of farming in the society.

The group ventured out to the hills of Rock Hall in St Andrew West Rural to continue the work they started in 2016 benefiting Brown’s Town Primary and Bob Marley Primary in St Ann, for the team’s celebration of the ‘Earth to Kitchen’ initiative’s sixth anniversary this year.

The initiative’s aim is to help schools become more sustainable, while embodying the theme ‘Eat what you grow and grow what you eat’.

Senior teacher Christopher Litchmore, who is in charge of the school’s 4-H Club, expressed gratitude in receiving the gift. He confessed that donations came right in time as prior to this, the school’s agricultural programme had died due to the onset of the COVID-19 pandemic. He added that this gift will act as the rejuvenating push that was needed to revive the programme.

“The students are generally receptive [of farming activities] but there has been no time to do it on our own. Since we got this start, we will be able to monitor and continue in conjunction with the 4-H programme,” said Litchmore.

Titanya Clarke, who in 2016 was appointed social outreach chair of G2K, said she made it her mandate to continue the initiative.

“Now as vice-president with direct oversight for the social outreach committee with my amazing chair and team, we have been able to keep it alive this year,” she said.

With the support of the initiative’s sponsor, the Jamaica 4-H Club, which has sent, year after year, expert members to assist the G2K’s social outreach committee, they have been able to identify various areas to carry out agricultural activities, she explained.

Because they were unable to visit schools on a yearly basis, the team has only visited four schools since 2016, sitting out the period of 2018-2020.

However, Clarke stated that the group’s goal is to make this activity an annual ‘anniversary month activity’ in the future, impacting more schools moving forward.

“Our last school was Maldon Primary in St James and I am happy to report that they are still using the crops we planted and have somewhat become our adopted school as the principal keeps us updated on the crops and the school’s activities,” said Clarke.

As the farming industry could use the involvement of more youngsters in what many farmers have deemed to be a lucrative profession, Clarke said it is important that Jamaicans consider the sustainability of farming that provides great opportunities. She therefore encourages more young people to engage in farming.

To achieve this, there will be a greater reliance on technologies and innovation that will make work more appealing and convenient, she said.

“We could even see how farmers are helping to keep us alive while many countries had major food shortages during the pandemic,” said Clarke, citing when the Ministry of Agriculture and Fisheries launched its ‘Say Yes to Fresh’ campaign, in efforts to encourage more Jamaicans to buy more local produce from farmers.

“I have never eaten so many vegetables and ground produce until COVID-19 hit,” Clarke confessed, adding that she would love to see more Jamaicans eating local produce.

But with the country’s export to import ratio being significantly high with imported goods becoming far more attractive, Clarke cautioned that more Jamaicans need to understand the importance of consumer power.

“We need to put our money where our mouth is and buy local. It is the only way we can truly be self-sufficient,” she said.

The Statistical Institute of Jamaica reported in its International Merchandise Trade Bulletin on January 14, that between January and September of last year, Jamaica’s total spending on imports and earnings from exports increased by 23.3 per cent and 26.3 per cent, respectively, when compared to the corresponding period in 2020.

With increasing access to information and “the health tide shifting”, Clarke expects that Jamaicans will inevitably ‘Eat what they grow and grow what they eat’ given the evident progress of the Government’s ongoing efforts to invest in small farmer-training and support.

Pearnel Charles Jr, minister of agriculture and fisheries, reported in February a 10.4 per cent growth in Jamaica’s overall domestic agricultural production for its fourth quarter of 2021 (October to December), up from 697,678.8 tonnes in 2020 to 770,456.2 tonnes last year.