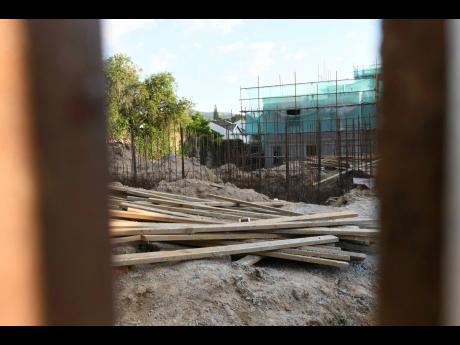 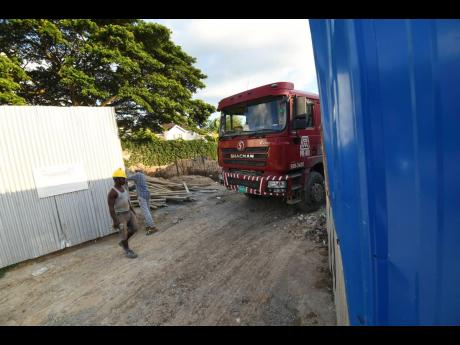 File
This October 2019 Gleaner photo shows a truck reversing into the 29A Dillsbury Avenue property in St Andrew.
1
2

The judicial hammering of the Kingston and St Andrew Municipal Corporation (KSAMC) and the Natural Resources Conservation Authority (NRCA) continues, with another judge now chastising the state regulators for breaking the law in approving a housing development in St Andrew.

In overturning the permits issued by the KSAMC and the NRCA for Plexus Limited to build a complex at 29 Dillsbury Avenue, Justice Sonia Bertram Linton slammed the authorities for disregarding the country’s laws.

“The planning authority does not have a structured system of enforcement. This is made clear by the fact that no proper checks were done by them to ensure the actual development … matched what was submitted in the plans,” the Supreme Court judge said in a 35-page ruling handed down on Friday.

“This practice of putting the cart before the horse needs to be discontinued, so that the planning authority can effectively fulfil their duties under the building regulations.”

It is the latest stinging rebuke from the Bench and follows one last December in which another Supreme Court judge raised questions about negligence or possible corruption at the KSAMC and the National Environment and Planning Agency (NEPA), the administrator for the NRCA.

Regarding the Dillsbury case, a judge had halted construction in October 2019 until the matter was decided in a judicial review that examined whether the process used by the authorities to grant the approvals was fair and legal.

The KSAMC’s chief executive officer Robert Hill said the corporation will advise on what steps to take next.

Four residents, in August 2019, applied to the Supreme Court for a judicial review of the decisions of the KSAMC and the NRCA to permit Raymond and Wendy McMaster to construct five town houses and a four-storey apartment block consisting of six apartment units at the Dillsbury complex.

The development is now finished.

The NRCA approved its permit in September 2018, while the KSAMC’s building approval was granted in November that year.

But the residents – Hope Wint, Samantha Gayle, Richard Coe and Janet Wright – say they received a notice of the developer’s intention to submit plans for the construction after the documents were already provided to the KSAMC.

Under the Kingston and St Andrew Building (Notices and Objections) Regulations, the notice would trigger a 30-day period during which the residents could make formal objections.

Justice Bertram Linton said based on the regulations, the residents had a legal right to have their objections considered by the KSAMC before making its decision.

She said it would have been enough even if the municipal corporation did not have a hearing but only considered the complaints.

“The failure on the part of the KSAMC to consider the claimants’ objections or to convene a hearing was unfair in that it breached their legitimate expectation, principles of natural justice and ultimately was a breach of [the regulations],” the judge said, before criticising how some of the KSAMC’s senior officials did their job.

In one instance, Justice Bertram Linton noted that Shawn Martin, a senior planning officer, admitted that the developers did not submit drawings showing the average grade of the property.

The law allows the KSAMC to request the information.

Martin said the KSAMC conducted its own assessment after which permission was given. But the basis for that decision has been thrown in doubt.

“When asked about the document containing this assessment, he (Martin) said that there was no document in existence to reflect the assessment. He also said that there were differences in the plans submitted and what was happening at the development,” the judgment said.

In another questionable action, the court noted that the plans submitted in evidence in the court case were different from the ones used by the KSAMC, and further that Xavier Chevannes, the chief engineer, admitted that the KSAMC did not have a document to determine the average grade of the complex.

Chevannes also told the court that he did not check the depth of the apartment to see if it was in line with the approval and that there was no document reflecting this inspection which he said was done by officials identified in the judgment as Deputy Building Surveyor Jeremy Lawrence and a Mr Clarke.

The judge concluded that the actions of the KSAMC “were illegal and irrational”.

“The KSAMC failed to do the necessary checks or request the relevant information needed to ensure that the plans conformed with the regulations,” Bertram Linton said.

The case also highlighted a difficulty many other residents have had with the authorities – getting copies of drawings submitted by developers who intend to construct buildings in their neighbourhood.

The judge later pointed to some “strange” actions of the authorities.

“The court finds it strange that the KSAMC, who is responsible for outlining the prescribed distance from the roadway, knew that in this case it should have been at least 5ft away and did not adhere to its own rules with the development,” the judgment said.

In another instance, the court questioned the NRCA’s own understanding of its authority.

The NRCA’s official, Gregory Bennett, told the court that the basement was below ground level and should not be considered a floor although the residents were able to show that the top of the basement was 10 feet off the ground.

On that basis, the NRCA said it was rational to issue the permit since it was based on the drawings submitted, which it said met the guidelines.

But the judge rejected the view, noting that the NRCA appeared to be saying that once it approved the plans, it had no enforcement and supervisory powers to ensure that the permits are adhered to.

“Presumably, as well, the permit, once granted, cannot be revoked if it is found that the promised adherence and basis for approval has not been complied with,” said Bertram Linton, appearing to mock the NRCA, which she said failed to discharged its duties.

She added: “It is certainly a strange thing that the authority was not able to verify post-construction details and seemed not inclined to do so either, in order to carry out its own approval guidelines.”

Justice Bertram Linton also said it was “quite surprising” that Shawn Martin “could not say if the authority had at any time satisfied itself that what was in the approval was what was on the ground. But was able to identify that from the documents in court that there was a difference”.

The judge affirmed that the NRCA has the authority to ensure that its guidelines are followed and that “it is erroneous to believe that the decision to grant the permit prior to construction is the end of their responsibility”.

The judge accepted the residents’ claim that a unit described as a studio and is between 400-500 square feet should, for density purposes, be viewed as one-bedroom unit or two habitable rooms.

The residents were represented by Gavin Goffe of the firm Myers, Fletcher & Gordon; Rose Bennett Cooper and Sidia Smith for the KSAMC and Althea Jarrett and Kristina Whyte from the Attorney General’s Chambers for the NRCA.

‘JUSTICE DELAYED IS NOT REAL JUSTICE’

Gayle, one of the residents who took court action, said she was pleased with the outcome of the matter “despite the continued discomforts and inconveniences of the now completed construction and the fact that justice delayed is not real justice”.

She added: “I am grateful that the court heard our matter, highlighting the failures of the authorities to operate with fairness and legality – and that I hope that our community and others will now benefit from the authorities being called to account for their roles and responsibilities.”

The KSAMC announced a raft of reform measures in the wake of last December’s ruling in which a judge visited and found a development at 10 Roseberry Drive in breach of its permits after Cliff Rochester-Butler-led Belgravia Development constructed 32 bedrooms on a property approved for just 12.

The KSAMC has since imposed a stop order on the apartment complex until the issues are corrected.

Martin, who gave evidence in the Dillsbury case, and another KSAMC official, Calvet Sutherland, were sent home in December on full pay while investigations continued into building and planning approvals given by the KSAMC.