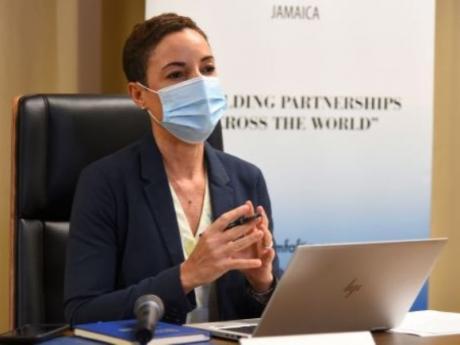 Johnson Smith: The students were given a choice to go back towards L'viv or to walk the journey and they decided to walk.

Twenty-four Jamaican students who yesterday arrived in L'viv, Ukraine from Kharkiv by train are now forced to walk a 20-kilometre journey to Poland.

Foreign Affairs Minister Kamina Johnson Smith says the bus that was carrying the students to Poland was blocked by angry people for "overtaking".

She was unable to say whether the vehicle had overtaken traffic or pedestrians.

According to the minister, the students were given a choice to go back towards L'viv or to walk the journey and they decided to walk.

Currently, thousands of Ukrainians are travelling to the Polish border in nearly freezing temperatures to escape the deadly military invasion by Russia.

Yesterday, 23 of the 28 Jamaican students in Ukraine arrived in L'viv.

Another arrived this morning.

Johnson Smith says Jamaica's charge d'affaires Deniese Sealey in Berlin has been deployed to Poland to receive the Jamaican students.

Sealey will be working with friends of Jamaica, members of the Jamaican community and the Honorary Consul of Jamaica to Poland.

"She will provide general support to the process including settling the arrangements made for their accommodation and subsistence already underway,” said Johnson-Smith.

According to the minister, a diplomatic note has been sent by the Jamaican Embassy in Berlin to the Polish Ministry of Foreign Affairs requesting safe passage for the 28 Jamaican students in Ukraine.