Jamaican student, mom recount the horrendous journey out of Ukraine into the safe arms of his family in Clarendon 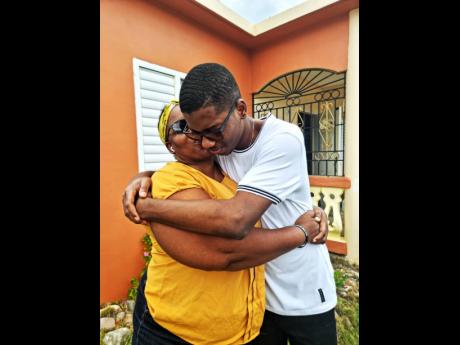 Contributed
Contributed Kelly-Ann Tulloch embraces her son Joel Tulloch, a medical student who was among those studying in Ukraine before the Russian invasion. Joel arrived home safely to his family in Longville Park, Clarendon last week. 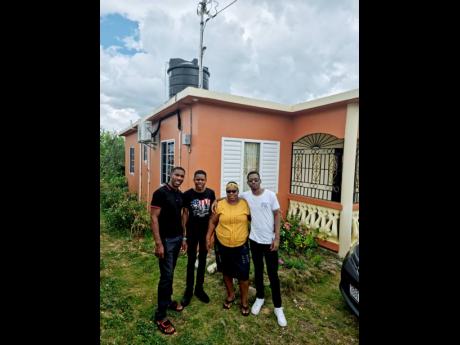 The final six minutes were the most excruciating for Kelly-Ann Tulloch on Wednesday night. For the past two weeks, she had not slept, as images of gunfights and bombs exploding on her son in Ukraine burned deep in her mind. Finally, her prayers...

The final six minutes were the most excruciating for Kelly-Ann Tulloch on Wednesday night. For the past two weeks, she had not slept, as images of gunfights and bombs exploding on her son in Ukraine burned deep in her mind.

Finally, her prayers were answered. Her firstborn had escaped that war-torn country and had arrived in Jamaica. But now, the vehicle transporting him from the Sangster International Airport in Montego Bay, St James seemed to be taking forever.

They said it would be a three-hour journey to Clarendon, other student drop offs included, the anxious mom told The Sunday Gleaner. But, as the clock wound on, the worried mother sat on her verandah, midnight dew soaking her head, and cursed herself for not picking up her child herself.

“Me reach outta the gate and I say ‘any car, any bus ... if is even a truck coming ... is dem!’” she recounted. “I said, ‘look from when they said six minutes away’. Six minutes gone already and me can’t see no light.”

Kelly-Ann whispered one final prayer: “God, please don’t let anything else happen to him.” And then headlights pierced the darkness in the distance.

“When me see the light a come, me start to jump up inna di before day. Me seh ‘a him this!’ and start meck noise, you know! Inna di quiet residential scheme, you know!” she laughed, referencing Longville Park in Clarendon where residents who knew 20-year-old second-year medical student Joel Tulloch were equally on edge awaiting his return.

“Him reach about 12 o’clock or a little after 12, and like the man (driver) start opening up the back. But I didn’t want to see any bag or any suitcase. I wanted to see my son,” Kelly-Ann exclaimed, recounting the sweet yet bitter sight.

“When me see him, is pure skin and bones, but me glad fi see me son. I only wanted to know me son come.”

Close by, Joel’s father, Nicholas Tulloch, had awakened from a nightmare.

“It was like I was coming out of a wilderness, a space of uncertainty and now realise that there was hope at the end of the tunnel,” his dad told The Sunday Gleaner. “When they made about three attempts and each time they couldn’t get on the train (to leave Ukraine), I was saying this thing not going to happen.”

“But one thing, though, we trusted God. He was at work,” he said. “He was doing the restoring. I don’t know why He allowed this experience but maybe the future will tell.”

For Joel, the future has already started speaking. Now, he is being hugged by family, a sharp contrast to the hug shared among himself and other fretful Jamaican students at a metro station not far from their school, V.N. Karazin National University in Kharkiv, a week earlier.

Kharkiv, the second-largest city in Ukraine, came under attack last week by Russian forces who reportedly bombed an administrative building, killing and injuring several civilians. Footage of the incident and others of burnt buildings and military vehicles have gone viral on social media as Russian forces made their way to Ukraine’s capital, Kyiv.

It is the hellfire, which Joel and other students who were awakened and driven underground by distant predawn bombs, had been fearing. Luckily, he escaped before the onslaught started, but the memories of what he endured will live on, he said.

“I feel happy that I was able to escape what is happening. Right now, I am currently having dinner with my family after two years, and that is the best feeling I could ever have,” said Joel on Friday. “To know that the city where I was living has been taken over and destroyed makes me sad but I know Ukraine will bounce back. For me, it’s just good to be home.”

On at least one occasion on the journey out of Ukraine, as he and others huddled inside the metro station after the first bombs exploded, there were stampedes as people panicked in anticipation of the invasion by Russian soldiers. Many walked along train tracks deeper into tunnels, desperate for safety, he said.

There was no cellular phone signal and food was low, Joel recalled, sharing how he and other students slept uncomfortably in a shelter for one night before emerging hours later the following day.

With airports closed as the Russians stepped up their attack to capture Ukraine, the main option for the Jamaican students was to make their way to Poland, where other Jamaicans were waiting. But that meant a journey to Lviv in Western Ukraine, which was a task in itself. Long story short, Joel said, they managed to hire two taxis to the train station connecting the two major cities. That’s where they met up with other Jamaican students.

“And that is where the trouble started,” he said. “Whilst going to get tickets, a bomb fell literally outside of the train station, and everybody started running underground. And as soon as the train came, another bomb fell and then most people and the Jamaicans ran leave the train.”

He said some people stayed behind and boarded the train, which ultimately left the stragglers. “That’s when we formed a circle downstairs and started singing ‘He is Here’ and one of us prayed. That was the last thing that we knew how to do,” Joel said, noting that this was about 2:00 p.m. and that they were told another train would be available at 9:00 p.m. So they waited.

But the second train also left them. It was deemed full. Hours later, they found another to get on but they had to fight their way aboard.

All 24 Jamaicans were soon accounted for and the stuffy train ride to Lviv lasted 24 hours, passing a checkpoint where Ukrainian soldiers scouted the transportation for fleeing Ukrainian men who were made to stay back and fight.

From Lviv, they took a bus to get as far as they could to Poland, but that vehicle was stopped by angry civilians as it tried to cut the long line of traffic heading to the border. That’s when Joel and the other Jamaican students had to get out and walk the rest of the journey.

On at least one occasion, they were offered a ride part of the way but, for much of it, they walked the 20 kilometres trek, he said, all the time fearing the worst.

During it all, Joel’s grandmother Doreen McIntosh said she knew he would make the journey.

“I said to God, ‘God, my grandson could be a gunman in Jamaica. He could be a goat thief, he could be a hog or a cow thief, but is the ambition that him have to be a doctor to come back and help we nation, and God I know you not going to let the enemy kill him’,” Doreen chanted.