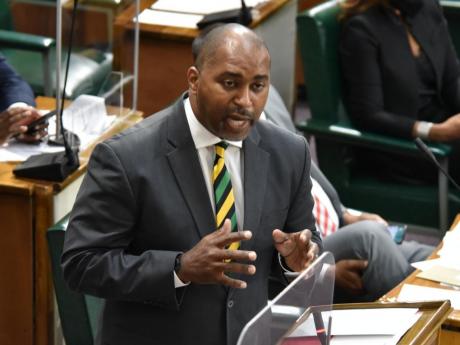 The Opposition People's National Party has called for an increase in the minimum wage to $12,000 to better allow Jamaicans to meet their basic needs.

Last month, the government announced that effective April 1, the minimum wage will move from $7,000 per 40-hour workweek to $9,000.

In his presentation in the budget debate in Parliament this afternoon, opposition spokesman on finance Julian Robinson said minimum wage workers waited four years for an increase.

“The increase to $9,000 is far from what it needs to be. In fact, inflation has already eaten it away,” he lamented.

Robinson offered a solution to those who may say employers cannot afford the increase as they earn a fixed income.

He explained that employers can reorder their arrangements, for example, allowing a domestic helper to work four days a week instead of five, giving the minimum wage earner a day to work somewhere else.

“We want to move away from a minimum wage and instead look at implementing a mechanism to determine a liveable wage. This should be rooted in analysis of annual price movements, the inflation rate, and a determination of the basket of goods and services consumed by lowest earners,” he said.

Robinson added that this analysis should be done annually to protect the most vulnerable workers against the ravages of inflation.

Meanwhile, Robinson highlighted that food prices are high and Jamaicans are suffering.

Using data obtained from the Consumer Affairs Commission (CAC), Robinson compared the prices of some basic food items over the past year.

It was highlighted that food prices increased by as much as 44 percent.

Flour increased by 32 and rice moved up by 38 percent.

“How do we expect the people who earn the least to do the most basic thing for their survival, which is to eat? How do we expect working people to maintain their health and their dignity when they cannot afford to feed themselves and their families? How do the children learn?” Robinson asked.

He said the prices of chicken and flour have increased since the CAC's publication and the price of flour is likely to increase yet again as the crisis unfolds in Russia and Ukraine.

Both countries account for some 25 percent of wheat production worldwide.