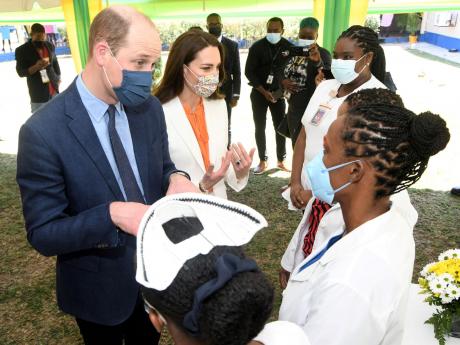 Lower level staff at the Spanish Town Hospital in St Catherine say they were instructed to stay clear of the Duke and Duchess of Cambridge who toured the facility this afternoon, a decision which, they say, has left them feeling “small”.

The group, who asked not to be identified, said that they were part of the general staff that had gathered near corridors to glimpse Prince William and Kate who visited the vaccination centre and the maternity ward at the hospital.

But what the staff said should have been a “light, feel-good moment” was dampened by orders from their supervisors and hospital senior staff to keep the areas sterile.

It does not appear that this instruction was communicated to mid-level and senior staff members who recorded, greeted and cheered for the royal couple upon their arrival.

“We are all human beings. Everybody have eyes to see. Them gwaan like them better than people and a the same worker them a run, them a go call tomorrow fi deal with things,” one of the workers told The Gleaner in a hushed tone from behind a grille.

“Them run go call the supervisors bout 'tell them to move them. Move them'. Yuh nuh see which part we affi deh? Me nuh like how them deal with we. We feel a way because we a human beings like anybody else. Nobody not to be treated like that…And then them say you nuh have nuh manners,” another worker interjected.

The Gleaner contacted the hospital's CEO, Jacqueline Ellis, who said that she was not responsible for lower-level staff at the hospital and did not interact with them or give any instructions.

She said the group is made up of contractors that include security guards and janitors.

"We had no discussions with them except that they are to clean up the place," she said.

Ellis said other staff members were told to keep the corridors clear and not to walk in the path of Prince William and Kate.

“We allowed them to move freely but based on protocol, you can't come up and hold on to him or shake his hand. They know that they are not supposed to walk in front. We wouldn't want them to be walking in the middle while they (royals) are walking,” she said.

"But he will wave and you take your picture and that is that.”

Prince William and Kate are on a three-day visit to Jamaica which ends tomorrow.

The visit forms part of a wider Caribbean tour in celebration of Queen Elizabeth's platinum jubilee.